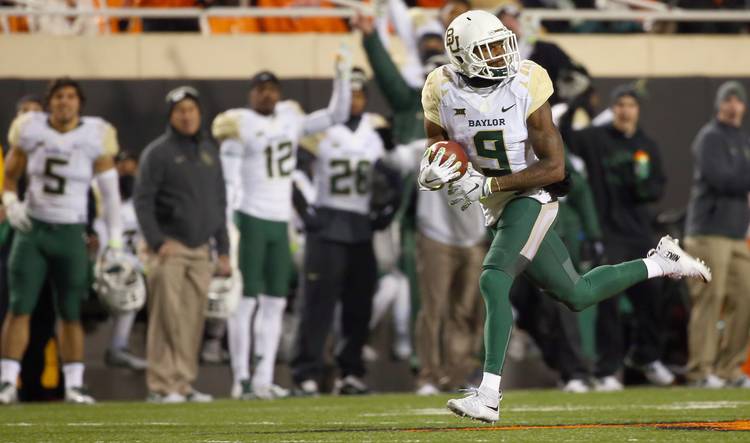 STILLWATER, OK - NOVEMBER 21: KD Cannon #9 of the Baylor Bears pulls in a touchdown pass against the Oklahoma State Cowboys in the second half at Boone Pickens Stadium on November 21, 2015 in Stillwater, Oklahoma. (Photo by Tom Pennington/Getty Images)

On Saturday afternoon against Baylor, the eyes of Texas will be upon …

Linwood has only scored twice this season, but he’s averaging 6.5 yards per rushing attempt. At 83.3 yards per game, Linwood is also the third-leading rusher in the Big 12. Linwood rushed seven times for 31 yards in last year’s 23-17 loss to Texas, but he went for 148 yards and a touchdown in the Bears’ 2014 win over the Longhorns.

Texas fans who still shiver at the memory of Cal’s Chad Hansen and Oklahoma’s Dede Westbrook may want to keep an eye on Baylor’s dynamic pass-catcher. Cannon has 30 catches in his five games played, and he’s averaging 14.8 yards per catch. Cannon has five touchdown catches, the longest of which was a 59-yard score last week against Kansas.

A two-time All-Big 12 honoree, Stewart is likely on his way to another all-conference nod this fall. Stewart, a fifth-year senior, leads the Big 12 with four interceptions, and his eight passes defended rank behind only Oklahoma cornerback Jordan Thomas’ 11. Stewart also has scored this season; he had a 33-yard interception return against SMU on Sept. 10.