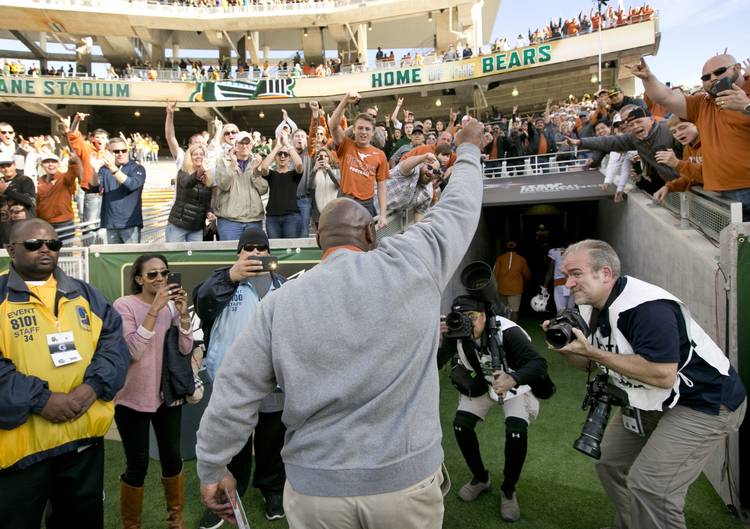 Brian Davis: Baylor must be loving all of this

For Baylor fans, this must be a delicious moment. Come to Austin with an undefeated team and possibly secure a UT coach’s demise? On the fan enjoyment scale, that might rank second behind winning back-to-back Big 12 championships just a few years ago. Still, the Longhorns were thought to be left for roadkill last season in Waco, and they rose up and punched out the Bears, who were already packed for the Sugar Bowl. Expect players on both sides to be ready. “I don’t like Baylor. I’m Texas all the way. A Texas boy,” UT senior Kent Perkins said. Sounds like a real rivalry, indeed. Somewhere, Steve Edmond will be watching, ready to cheer on his Horns and let the Bears have it.

Danny Davis: If it’s close, can Texas close it out?

Texas opened the season with a double-overtime win over Notre Dame, but fans were then left to play the “coulda, woulda, shoulda” game in a Seven-point loss to Cal, a five-point loss in the Red River Showdown and that three-point slip-up against Kansas State. I don’t doubt that Texas can keep the score close on Saturday — and neither do the fine folks in Vegas, apparently — but can the Longhorns show enough poise to win a close game?

Kirk Bohls: Baylor has lots to prove at DKR

The small point spread still baffles me, but those folks usually know more than most. If Kansas State can do what it did to Texas, what is highly motivated Baylor capable of? I’m thinking the Bears are tired of critics taking shots at their schedule and lack of worthiness and will take it out on the Longhorns. Texas is unbeaten at home, but against three bad teams. Can’t see Baylor slipping up.

It wasn’t too long ago that Texas used to own Baylor. That changed when Art Briles showed up in Waco and began recruiting the state with tremendous success, signing eventual Heisman Trophy winner Robert Griffin III, followed by a slew of successful passers. Now with Briles gone, the offensive mystique isn’t as great, but the team can still put points on the board. Texas is still on the business end of this recent rivalry with a 2-4 record in the past six meetings. It doesn’t take long for momentum to switch, and it certainly did in this rivalry. By the looks of things, the pendulum doesn’t appear ready to swing Texas’ way anytime soon.