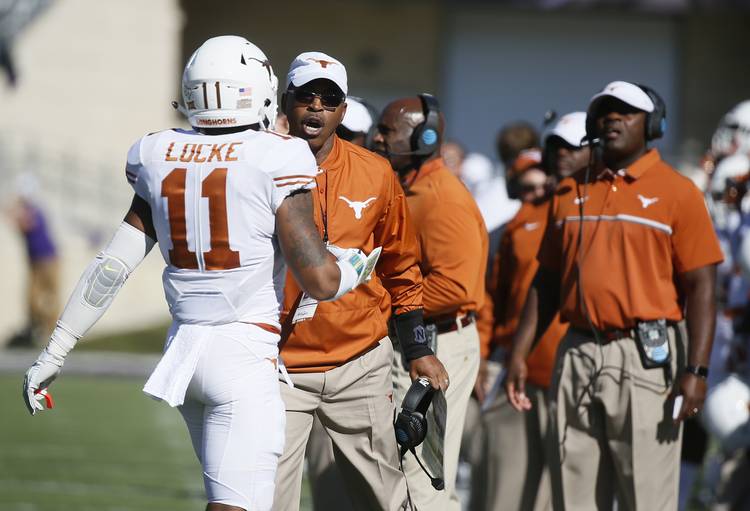 P.J. Locke III was a standout student at DBU on Saturday.

In the 35-34 win over Baylor, Locke, a sophomore, intercepted a pass, recovered a fumble and had two big pass breakups.

Locke, playing nickel back, got to work on Baylor’s second drive when he turned a ricocheted pass into the first interception of his career. Later in the quarter, he broke up a third-down pass attempt by Seth Russell. And later, his fumble recovery at Texas’ 7-yard line on the first play of the fourth quarter helped the Longhorns maintain their five-point deficit at 31-26.

Texas’ defense, which was allowing 263.1 passing yards per game, gave up 226 on Saturday. But the Bears rushed for 398 yards.

Turnover to TD: Locke’s first-quarter interception set up D’Onta Foreman’s 37-yard touchdown run, which gave the Longhorns a 14-7 lead. It marked the first time this season that the offense scored a touchdown off a turnover by its defense.

Texas entered the game with nine turnovers, but the Longhorns had converted those takeaways into only one field goal. Texas lost yardage on four post-turnover possessions, and three gifted drives taken inside the opponents’ 30 were thwarted by an interception, a failed fourth-down conversion and a missed field goal.

Foreman’s touchdown wasn’t a sign of things to come, though. Texas was unable to score after Locke’s fumble recovery in the fourth quarter.

Scoot over: One week after replacing injured center Zach Shackelford in the starting lineup, Jake McMillon moved one spot to his left.

McMillon started at left guard. The 6-3, 300-pound sophomore replaced Patrick Vahe, who didn’t play. McMillon has now started at three different positions this year. Listed as the backup center on Texas’ depth chart, McMillon was the starting right guard in a 49-31 loss at Oklahoma State on Oct. 1

Vahe was the only consistent starter on Texas’ offensive line over the team’s first seven games.

A new RB: Tyrone Swoopes didn’t see much playing time at quarterback, but Texas still found ways to get the football to its 18-Wheeler.

Swoopes was used as a backup running back, and he took six handoffs. Swoopes gained 11 yards on his carries, the longest of which was a nine-yard burst in the first quarter. Swoopes, who has downplayed speculation about a possible switch to running back or tight end, also lost and recovered a fumble.

Two Texas series and a 2-point try in the fourth quarter did feature Swoopes in the 18-Wheeler.  Swoopes, though, lost four yards on his official rushing attempt, and was stopped short on the 2-point try.

Odds and ends: An announced crowd of 97,822 was the second-largest crowd of the season for Texas. With games against West Virginia and TCU left on the home schedule, Texas hasn’t dipped below 92,000 for any of its games. Texas exceeded that attendance threshold only twice in 2015. … Gov. Greg Abbott and actor Matthew McConaughey were among those in attendance. … Shane Buechele has thrown 17 touchdowns; that already has placed him into the No. 13 spot on UT’s career list. And he tied Bobby Layne for most starts by a freshman quarterback (eight), and is one win from Layne’s UT record of five wins by a freshman quarterback. … Armanti Foreman’s 142 receiving yards were a career high.