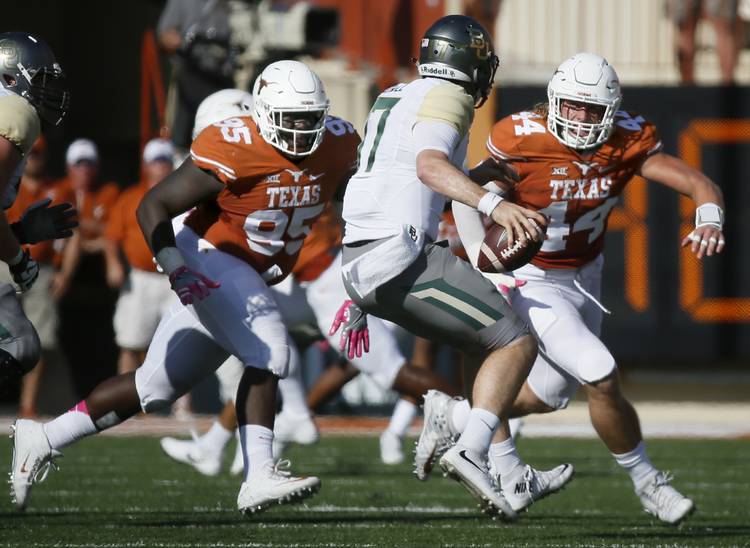 Texas defenders Poona Ford and Brecklyn Hager put pressure on Baylor quarterback Seth Russell on fourth down forcing a fumble and a turnover on downs during the first half, Saturday, October 29, 2016 at Texas Memorial Stadium, Austin, Texas. RICARDO B. BRAZZIELL/AMERICAN-STATESMAN

On Saturday morning, we asked four questions about the Texas-Baylor matchup.

Russell, who had won his first 14 games as a starter, drops to 14-1. But he didn’t go down without a fight — 14 of 28 for 226 yards, two touchdowns and an interception, plus a 21-carry, 138-yard rushing performance with another score. Seeing him run the Baylor offense was a far cry from what the Bears had to work with last year, when Art Briles — Art Briles! — resorted to a wildcat offense after his third-string quarterback gave way to a wide receiver-turned-quarterback for the second half.

2. DID BAYLOR ‘SHOCK’ TEXAS WITH ITS GROUND GAME?

Shock Linwood had a pedestrian day, with 17 carries for 67 yards. He averaged 3.9 yards a carry. What was shocking was to see what Terence Williams (24-180-1) and Russell (21-138-1) did in the running game. Their respective days nestled in right near the top of the top rushing performances against the Longhorns this year, right behind Oklahoma’s Samaje Perine, who had 214 yards against them. Williams and Russell are Nos. 2 and 3 on that list.

3. DID DEVIN DUVERNAY GET MORE THAN ONE LOOK?

Yes. For what it was worth.

Duvernay, who had only one catch last week, finished with only one grab on Saturday. For 2 yards. He was, however, targeted at least three times. The one-time Baylor recruit who ended up in Austin in the wake of the Bears’ sexual assault scandal, Duvernay has made a splash as a freshman. His 80- and 75-yard touchdown catches are Texas’ two longest plays of the season, and he also had a 63-yarder against Oklahoma. But Duvernay has only 11 catches on the season.

4. DID TEXAS FINALLY GIVE BAYLOR A TEST?

Baylor was unbeaten, ranked eighth in the country and was beating its opponents by an average of 26.5 points. But were the Bears really been tested? Four of their wins have come against teams that had 1-6 records heading into Saturday, and Oklahoma State had to travel to Waco on Sept. 24. The Longhorns haven’t been beaten at home.

Third and Longhorns: Inside Texas-Baylor