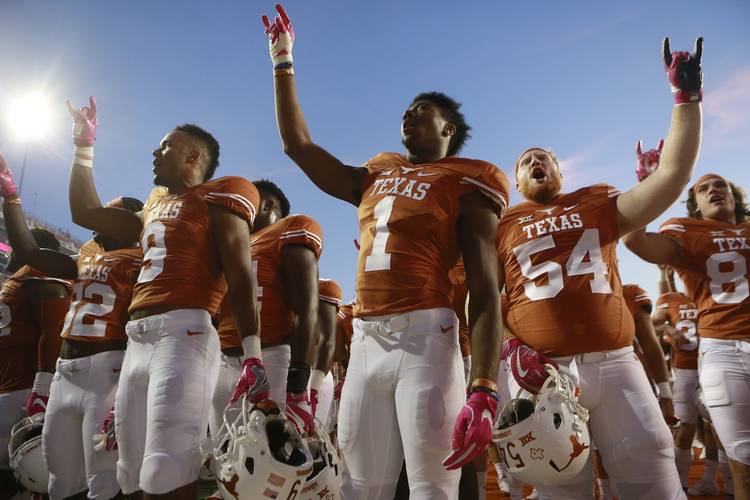 WHY TEXAS (4-4, 2-3) WON: D’Onta Foreman (32 carries, 250 yards, 2 touchdowns) was huge. Buechele was only 12 of 21 on the day, but threw for 291 yards and a pair of scores. The defense sacked Russell six times and produced two turnovers. And, perhaps, Texas won because it had to win — the second win over a top-10 program this season really has salvaged Texas’ bowl hopes, its season, its undefeated record at home and, possibly, Charlie Strong’s job.

WHY NO. 8 BAYLOR (6-1, 3-1) LOST: Where was the defense late in the game? And surely the Bears knew Foreman was coming today. Didn’t matter. Settling for two short field goals in the third and fourth quarters hurt the Bears at the end. Giving up six sacks hurt. Coming into Royal-Memorial Stadium hasn’t been easy this season. Texas showed the Bears why.

THE EYES OF TEXAS: … were on three specific Bears — running back Shock Linwood, the Big 12’s third-leading rusher who was averaging 83.3 yards per game; wide receiver KD Cannon, who had 30 catches heading into Saturday, averaging 14.8 yards per reception with five touchdowns; and safety Orion Stewart, a two-time all-conference player whose four interceptions were tops in the Big 12 heading into the weekend.

Linwood was held in check: 17 carries for 67 yards.

Cannon led Baylor with five catches for 86 yards and a touchdown.

Stewart finished with eight tackles, second-most on the team.

Defense: Malik Jefferson. Who needs to start, anyway? Jefferson led Texas with 10 tackles and included two sacks and 2.5 tackles for loss. And came thiiis close to a big fumble recovery for a touchdown in the closing seconds. It was called back, though.

(2) P.J. Locke III had a tip-drill interception that set up a touchdown and two big pass breakups on third down.

(3) Armanti Foreman had four catches that went for 142 yards, including a long of 51 yards.

ON DECK: AT TEXAS TECH (Nov. 5, 11 a.m., TV TBA): Road trips to Lubbock have tended to be real adventures for Texas in recent years. This one is a chance for the Longhorns to win a fifth game and get that much closer to a bowl game. But they’ll have to solve