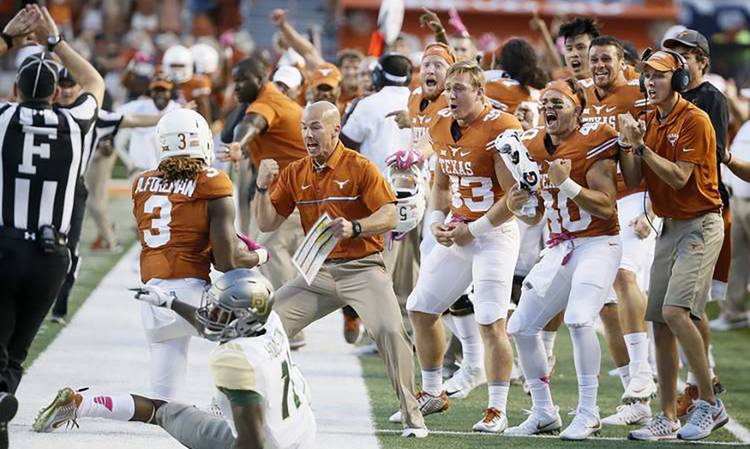 Call it vindication if you like. But Texas had plenty of folks out there Saturday capitalizing on second chances in the 35-34 win over Baylor.

Receiver Armanti Foreman had dropped a potential touchdown catch at Kansas State. This time, he ran a similar route and reeled in a 40-yard score.

Kicker Trent Domingue had three extra points blocked against Oklahoma State and missed a critical kick against K-State. This time, he hammered home a 39-yard field goal that proved to be the game-winner.

Linebacker Malik Jefferson was benched to start the game, if for no other reason than to get his attention. Jefferson responded with his best game of the year — a team-high 10 tackles and two sacks.

A secondary that’s been maligned all season had far and away its best game of the year. Kris Boyd knocked a ball up in the air and P.J. Locke III made a twisting interception. John Bonney had two impressive pass breakups on back-to-back plays.

And Texas coach Charlie Strong finally let off some steam. “It’s not a program that’s in disarray, which many of you think,” Strong said after improving his UT record to 15-18.

The Longhorns (4-4, 2-3 Big 12) are undefeated in four games at home, but if they can’t unleash the same level of aggression this week in Lubbock, it’s all for naught.

Texas Tech (4-4, 2-3) is coming off a big road win over TCU, and the Red Raiders always play the Horns with gusto at Jones AT&T Stadium.

“You cannot be a champion in this league if you’re not getting wins on the road,” Locke said. “Being undefeated at home, that’s a good start, but we have to transition that on the road.”

Make no mistake, Strong still controls his own destiny, even though he told ESPN announcers that no matter who is coaching here next season can win 10 games. Strong said he wasn’t trying to send any message. But this is a man who rarely hides his emotions.

Strong said that 17- and 18-year-olds read all the negativity on social media and believe it. He’s also received numerous texts from players’ parents with positive messages like “We’re praying for you. You have our support.”

“Every year, there’s a lot of coaches on the hot seat,” Strong said, “but it’s like the drama continues to play when it doesn’t have to.”

Snapchat and Twitter have damaged societal discourse, but Strong’s in a mess of his own making. The Longhorns are 1-7 in true road games since the start of the 2015 season, a stat that everyone inside the football building is tired of hearing.

Oddsmakers may be undecided, but is there any reason to think Texas can’t win its next four games? Tech, Kansas and TCU are all .500 teams or worse. West Virginia is 6-1, but Texas gets coach Dana Holgorsen’s club at Royal-Memorial Stadium on Nov. 12.

Texas has a sure-fire Doak Walker Award candidate in the backfield. D’Onta Foreman, Armanti’s twin brother, is third nationally in total rushing yards (1,105). That’s the highest total among any Power 5 running back in the nation.

At his current pace, D’Onta Foreman would have 1,737 yards in 11 regular-season games, which is more than three previous Doak Walker winners in the last 10 years. The junior was held out against UTEP on Sept. 10 as an injury precaution.

Heisman Trophy voters would consider an athlete’s body of work alongside the team’s overall record. Foreman could launch himself into the Heisman race, but for that to happen, Texas needs to keep winning. For his part, Foreman struck that signature, stiff-armed pose after scoring against Baylor.

“He’s doing things that are unbelievable,” quarterback Shane Buechele said. “He should definitely get recognition for it and especially for the trophy.”

Strong has told the players repeatedly to ignore all the outside noise.

“Coach Strong, he’s like a superhero for us,” defensive end Naashon Hughes said. “Every team meeting, he says, ‘Guys don’t worry about the media. I’ll take the bullets and take every hit they try to throw you guys.’ He just takes all the negative talk for us.”

Even the head coach admitted, “We should get what is given to us when we don’t play well.”

Therein lies the rub. If the Horns can keep winning, all the “noise” goes away. To help that, Texas must win in Lubbock.

Said defensive end Breckyn Hager, “We’re going to be about that action.”

Texas fans, not to mention UT President Gregory L. Fenves, sure hope so.