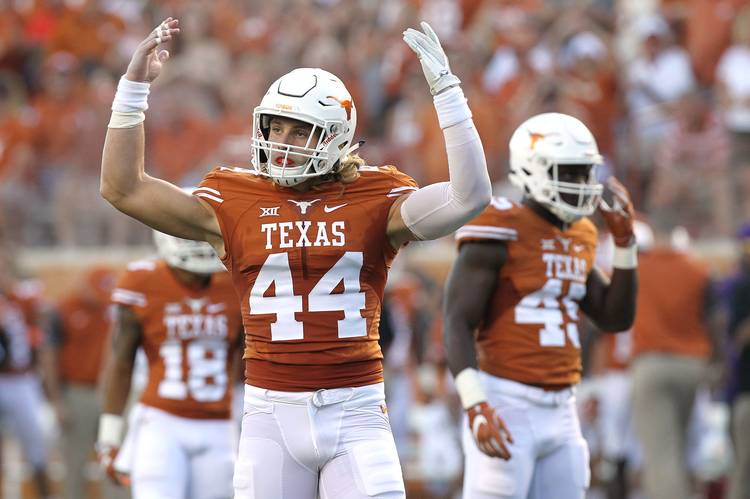 In their last home game, Texas Tech fans directed their scorn at Oklahoma quarterback — and Red Raiders transfer — Baker Mayfield. But Texas defensive end Breckyn Hager may be Lubbock Enemy No. 1 on Saturday.

While speaking at a media availability on Monday, Hager said the defense’s mission for its game at Texas Tech is to “injure that quarterback.” Texas Tech quarterback Patrick Mahomes II is the NCAA’s passing leader (3,519 yards), and he’s thrown 28 touchdown passes.

Hager’s comments were made while he was speaking in front of TV cameras. Since players speak separately to print and broadcast media, American-Statesman writers were not there for Hager’s comments. He had already been made available to print reporters before he made his comments on the TV side.

Hager on the Texas D's mission this week: "Injure that quarterback."

Breckyn Hager says multiple times that they want to "injure that quarterback". Trying not to take this out of context…don't think we are.

It did not take long for Hager’s comments to go viral. In fact, they caught the attention of Mahomes’ father.

Are you kidding meRT @RickyDoyle: Hager on the Texas D's mission this week: "Injure that quarterback."

Whether or not what Hager said was a tongue-in-cheek statement, Texas will be expected to get after Mahomes on Saturday.

Hager has registered a team-high five sacks, and Alabama is the only school with more sacks than Texas’ 31. The Longhorns are allowing 32.8 points and 461.9 yards per game, while Texas Tech boasts the Big 12’s best scoring offense (47.4 PPG) and total offense (600.2 YPG).

Reporter: "Against Kansas State you said the defensive mentality was to 'kill everything', what's the mentality of this game?" pic.twitter.com/RGx4sEFBmz

UPDATE (4:10 p.m.): After initially expressing remorse about his comments to Mike Finger of the San Antonio Express-News, Hager has released a statement. Speaking through the university, Texas head coach Charlie Strong also commented on the comment.

Said Hager: “I want to apologize for what I said earlier today at our press conference. I play hard and it’s our team’s goal to get pressure on the quarterback, hit him and disrupt the offense. When I go out there I want to play my most aggressive game, but I’m not trying to do anything to physically injure someone. I have too much respect for Patrick Mahomes and every quarterback I play against to ever do that. That’s not what I’m about, not the way I was raised and not the way we play football at Texas. Our coaches don’t teach us that or coach us to injure other players in any way. It was a really poor choice of words, and I truly regret it. My point should have been that it’s our job as defensive linemen to make our presence known and affect the quarterback. Life is bigger than a game, and I’m still learning how to be a better player on and off the field. I hope everyone will accept my apology for what I said.”