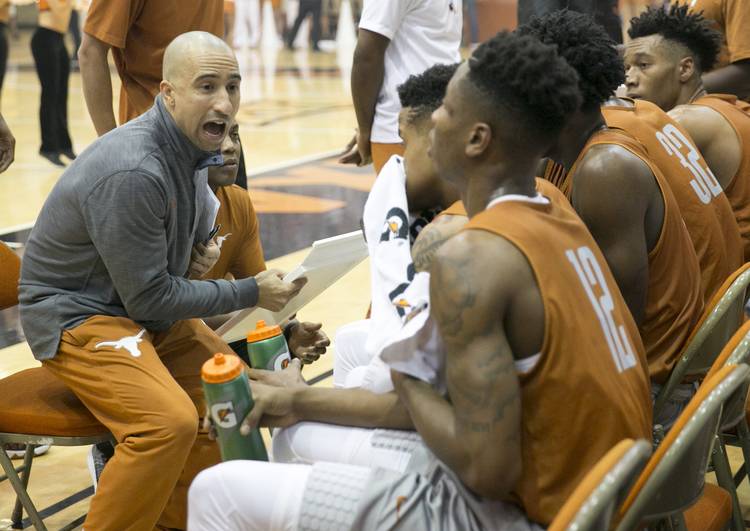 Texas coach Shaka Smart talks to his players during a timeout at the Texas Tip-Off at Gregory Gym on Thursday October 20, 2016. JAY JANNER / AMERICAN-STATESMAN

Texas men’s coach Shaka Smart should have been excited on Monday that his team will start the year ranked 21st in the Associated Press Top 25 poll.

Instead, Smart announced that sophomore leaders Kerwin Roach and Tevin Mack will be suspended for Wednesday’s scrimmage against Angelo State for an undisclosed violation of team rules that happened “months ago.”

Neither player participated in last Wednesday’s closed scrimmage against SMU. Smart would not say if either will go in the season opener against Incarnate Word on Nov. 11.

“I can’t tell you exactly when that will be, but they will be back on the court soon,” Smart said.

Roach is likely to be the team’s starting point guard. He averaged 7.5 points last season and shot 45.3 percent from the floor. Mack (6-7, 220) has bulked up this offseason and could make a dynamic small forward, likely coming off the bench initially.

This is Smart’s first known disciplinary action of any kind. Last season’s team had five seniors and veteran guard Isaiah Taylor. This year’s group skews much younger. Kendal Yancy and Shaq Cleare are the only returning scholarship seniors, and Mareik Isom is a graduate transfer.

“We’re taking about 18-, 19-, 20-year-old kids, and they are not going to be perfect all the time,” Smart said. “But at the same time, there’s a standard we have to set and uphold in our program if we want to be successful. And long-term, I think it’s really important to teach these guys lessons that’s going to allow them to be successful after they leave Texas.”

National recognition: Last season, the Longhorns didn’t break into the Top 25 until February and never got higher than 23rd. This year, they’re starting 21st, one spot behind West Virginia. Both are looking up at Kansas, which sits third.

“To be completely honest with you, we’re a long way away from being in the top 25 right now as I speak on Oct. 31,” Smart said. “I do think this is a team that can grow and develop and become all the things that we want to become, including a team that’s talked about and voted on in that area.”

Isom injured: Smart said Isom felt a twinge in his ankle while walking back to the dorms on Saturday after UT’s football win over Baylor. Tests reveled that Isom needed arthroscopic surgery to clean out a bacterial infection, something that will sideline the 6-9 forward for a few weeks.

Allen update: Freshman Jarrett Allen, who was held out of the Texas Tip-Off event, participated in the scrimmage against SMU and appears to be over his sore hamstring issue. “He’s been playing, been practicing. Doing well,” Smart said.

Texas History: The past says that win over Baylor ensures Charlie Strong will return