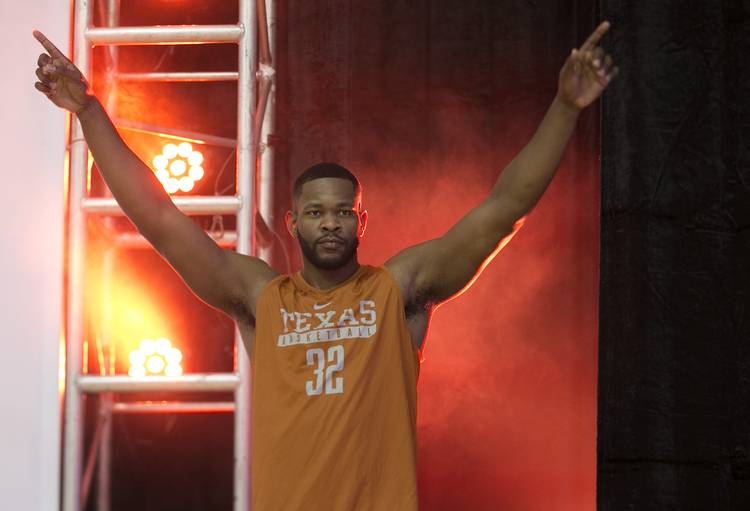 Shaq Cleare may have one of the biggest assignments of anyone on the Texas roster this season.

The 6-8 senior forward must take freshmen Jarrett Allen and James Banks under his wing and show them the ways of Big 12 basketball.

Fortunately for them, Rico Gathers is now tormenting defenders with the Dallas Cowboys. But there’s plenty of big men out there still lurking, like Baylor’s Ishmail Wainright, Oklahoma’s Khadeem Lattin and Kansas’ Landen Lucas.

It’s conceivable that Cleare and Allen play together extensively this season. The frontcourt rotation will be interesting to watch as No. 21 Texas plays its lone preseason exhibition game Wednesday against Angelo State. Admission is free; it will be shown on the Longhorn Network.

“People, they have their own impression of what our season is going to be like, but it doesn’t really matter,” Cleare said. “It’s really about our process for success. That’s the only thing we should focus on — who’s inside those lines with us every day. Those are the only ones who matter.”

Allen and Banks would be wise to listen to the well-traveled Cleare. He grew up in the Bahamas, left there at age 15 to play basketball and attend The Village School in Houston. He eventually landed at Maryland, but transferred to Texas under former coach Rick Barnes.

Cleare can help show the two freshmen how to play certain angles, what is and is not a foul and help them understand what to expect.

Smart indicated Monday he liked the bigger-is-better approach at Texas. In six seasons at Virginia Commonwealth, he said he never really had the same type of big men like he’s had already in two seasons here. Thus, Smart always went with a smaller, quicker lineup — the genesis of his trademark “Havoc” defense.

“Usually, we had only one on the floor at one time,” Smart said. “But knock on wood, the way recruiting is going, we’re going to be able to have a couple of guys up front pretty much all the time that we can play with and play through them, whether it’s on the low post or on the perimeter.”

For all the size the Longhorns had last season with Cam Ridley and Prince Ibeh, they were a surprisingly mediocre rebounding team. Texas was eighth in the Big 12 at 34.5 rebounds per game and ninth in rebounding margin (minus-1.3).

Two years ago with the same players, the Horns led the league in rebounding.

Smart can’t stop glowing about Allen. “For us, he’s going to make a big impact right away,” he said. “We’re going to play him at multiple positions. He’s going to be a guy that gets better and better over the course of the season.”

Banks also has incredible raw talent, but he could be up and down early. He played 22 minutes in the team’s Orange-White intrasquad scrimmage at Gregory Gym and finished with four points. Cleare had 12 points and went 6 for 6 at the free throw line in 21 minutes.