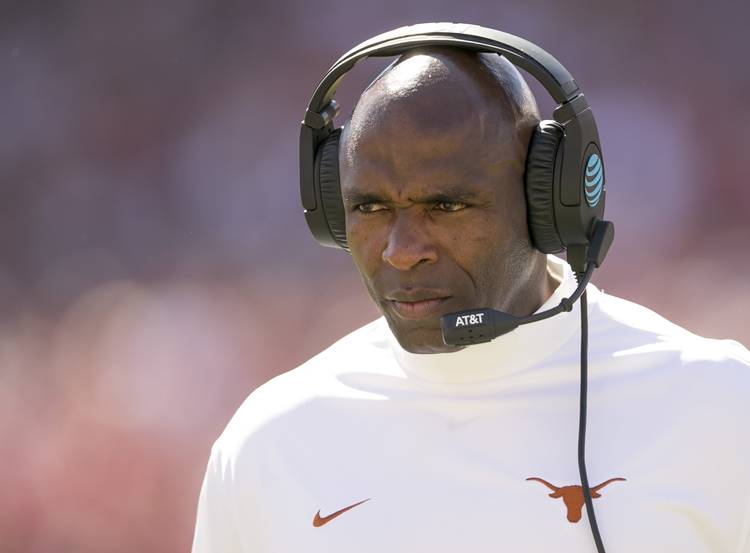 Texas coach Charlie Strong during the first half of the Oklahoma game at the Cotton Bowl in Dallas Saturday October 8, 2016. JAY JANNER / AMERICAN-STATESMAN

Even after last Saturday’s wild, exhilarating, flawed win over Baylor, Charlie Strong has at least four games left in his third season as Texas’ coach. So far, he has four wins to show for the campaign, along with four losses. But even after the giddy win over the Bears, Strong still could finish with his third straight losing season.

But Charlie Strong is safe. He’ll be back next year.

Well, not some anonymous administrator or booster who won’t allow a name behind a quote. It’s history. Cold, hard, written-in-stone history. We’re talking at least 66 years of Texas tradition, and depending on how you count, almost a century.

Consider this: The last time a Longhorns coach beat Baylor and didn’t return the following season was 1950. And even then, that was his choice. He wasn’t fired.

That season, after upsetting No. 1-ranked SMU and before topping Baylor, UT coach Blair Cherry, perhaps after receiving one too many nasty telegrams, dropped a bomb. He announced that he was walking away from college football, in part, because he was sick and tired of UT fans expecting him to win every single game.

Cherry didn’t have Kirk Herbstreit around to call Texas a cesspool. But he did have the hugely popular magazine, the Saturday Evening Post, to vent his frustration, which included a shot at recruiting in those days.

“It has become as much a problem to land a star athlete as to elect a congressman,” Cherry grumbled. “You have to devote more time to recruiting than coaching.”

Since Cherry’s departure, every Texas coach who set down his bucket — or had his bucket set down for him — lost to Baylor in his final season. That’s everyone from Ed Price to Darrell Royal to Fred Akers to David McWilliams to John Mackovic to Mack Brown.

The Bears do seem like a strange choice to be such a bellwether. By some standards, Baylor wouldn’t even be considered a real rival for Texas; the Longhorns now own a 76-26-4 edge on the Bears, winning about three out of every four times the teams meet. The game has never mattered as much to UT fans and power brokers as the blood feud with Texas A&M, and often a loss to Baylor was followed by a loss to the Aggies in those career-changing seasons. But by the time Brown was in what turned out to be his final season, the regular season finale was against Baylor as the Aggies had moved onto the SEC.

A look at past coaches’ final seasons — and the Baylor Effect:

Brown’s team was still clinging to a spot in the Top 25 when it faced No.9 Baylor on a bone-chilling December day in Waco. The Longhorns fought to a 3-3 tie at halftime, but were overwhelmed after intermission. In the final game at Floyd Casey Stadium, the Bears won the conference title with an 8-1 mark and the Longhorns, at 7-2, finished in a three-way tie for second. But if the outcome had been reversed, Texas would have been the one true conference champion and Brown would have been that much harder to displace.

Mackovic was pretty much a dead man walking after the second game of the ‘97 season, a humiliating 66-3 drubbing at the hands of UCLA. But by the time the Baylor game rolled around, at least Ricky Williams was still trying. He rushed for 241 yards and even threw a 27-yard pass touchdown pass, the only pass completion of his Texas career. That wasn’t enough. Baylor grabbed its only conference win of the year and Baylor students celebrated their homecoming by tearing down a goal post and lugging it to the home of school president Robert B. Sloan Jr.

McWilliams was coming off a 10-2 season in 1990 in which he earned a five-year contract extension. Things began to go south in 1991 on the very first day of the year — a bizarre, contentious, embarrassing 46-3 rout in the Cotton Bowl on New Year’s Day at the hands of the Miami Hurricanes. The 1991 season didn’t begin on much better notes with losses to Mississippi State and coaching nemesis Jackie Sherrill and then Auburn. The season, and McWilliams’ coaching career at Texas, ended with the loss to Baylor in Austin and then a loss to A&M that dropped Texas to 5-6.

It was a rocky season for the embattled Akers, but Texas was still 5-4 and 4-2 in conference play heading into Waco. But four interceptions and a lost fumble later, the Longhorns were a .500 team. And after losing to Texas A&M five days later, Texas had a losing season, something the Longhorn faithful had not endured in 30 years.

For Royal, Baylor was pretty much a bunch of teddy bears. After opening with a tie in 1957, his first season at Texas, Royal’s teams reeled of 16 straight wins against Baylor before suffering a loss in 1974. After a win in 1975, Royal’s Longhorns fell to Baylor 20-10. Texas rushed 37 times for a measly 14 yards as Earl Campbell missed the game with hamstring problems. After a loss to A&M and a win against Arkansas, Royal set his bucket down after a 5-5-1 season.

A close loss to Baylor dropped the Longhorns to 1-7 on the way to a 1-9 season in which the students hung Price in effigy not once, but three times. A coaching change was inevitable and Price announced during the season that he was stepping down.

Cherry was the last Texas coach to beat Baylor and not return the next season. But he announced he was going to walk away from college football before the Baylor game. Cherry’s team finished the season 9-2 and undefeated in conference play.

D.X. Bible also beat Baylor in his final season, but, like Cherry, it was his choice to leave coaching after an 8-2 season. Bible had planned to coach 10 years at Texas, which he did, and he turned down a 10-year extension offer in 1945. Instead, he became athletic director at UT. Bible’s predecessors were not as fortunate.

Chevigny, the former Notre Dame player who had famously scored one for the Gipper, tied LSU and beat Oklahoma when he ran into Baylor in the third game of the season. His team ended up on the wrong end of a 21-18 score, as Chevigny’s boys squandered an 18-0 lead. That got UT’s boosters grumbling. Texas later beat A&M, but still finished 2-6-1 in Chevingy’s final season, where his only two wins were against A&M and Oklahoma.

Littlefield — arguably Texas best-ever all-around athlete — was 4-2-1 as Texas’ coach in 1933 when his team ran into Baylor. The Longhorns appeared to have the Bears stopped cold; Baylor made only one first down all day, but on a sloppy field in Austin, the Bears hit a game-winning field goal with 30 seconds left to steal a 3-0 win. After a 10-10 tie with A&M to close the season at 4-5-2, the Athletic Council voted unanimously to keep Littlefield for the next season, but Littlefield, realizing there were other powers influencing the program, stuck to his decision to step down and concentrate on the Texas track program.

“I’d just made up my mind that if I wanted to live longer, I’d better quit,” Littlefield explained.

Stewart’s squad closed out a 5-4 season by beating Bible’s Texas A&M team in 1926, although he had previously lost to the Bears. His fate wasn’t decided until the following March, when Stewart exited with a career mark of 24-9-3 at Texas.

Whitaker didn’t face Baylor in his final season at Texas, but maybe he should have. At 5-0, Baylor won the conference while Texas finished 2-1 after losing the season finale to Texas A&M. The overall 7-2 season left Whitaker with a career record at UT of 22-3-1. Yet he had to deny rampant rumors that he was fired.

“I’m just too thin-skinned and too conscientious. Defeats killed me,” said Whitaker, who moved on to run intramurals at UT.

Juneau is the last Longhorns coach to beat Baylor and have others decide that he would not return for the next season. After all the politics were sorted out, Whitaker — one of Juneau’s assistants — was given the head coaching job for the 1920 season.

That’s almost 100 years of Texas history that says Strong is safe. At least for another year.

Texas women open with highest AP preseason ranking since 2004 — No. 8