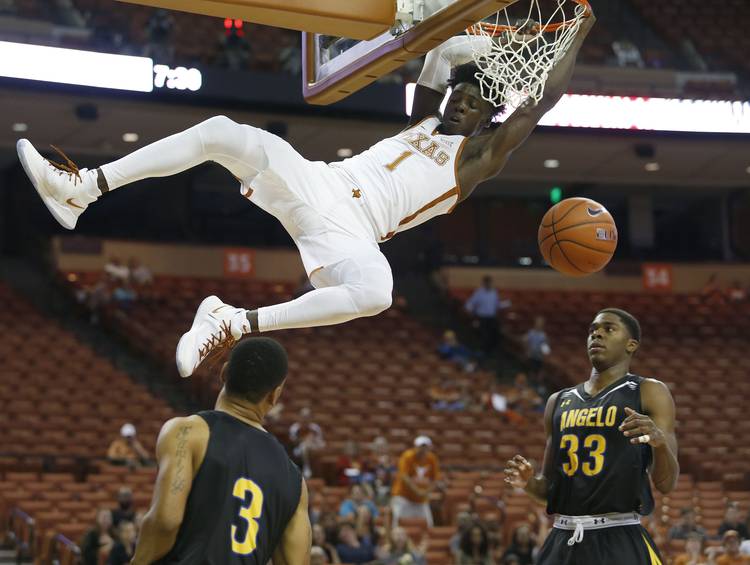 Perhaps P. Terry’s should honor the two remaining freshmen currently lacking hamburger accolades. Smart will take all four to go to places like Michigan, Oklahoma and Kansas this season.

Allen, the talented St. Stephen’s product, served up a double-double in Texas’ easy 95-55 exhibition win over Angelo State. Andrew Jones, Jacob Young and James Banks also had impressive moments Wednesday in front of a sparse gathering at the Erwin Center.

It stands as the only dress rehearsal before the 21st-ranked Longhorns open the season at home on Nov. 11.

“Basically coach Smart said don’t go out there nervous,” said Young, who had a game-high 21 points and went 4 for 8 from 3-point range. “He told me today that I was going to play a lot of minutes. I just prepared my mind for it before the game, and I was just ready to go.”

Jones had a whopper of a stat line. The 6-foot-4 freshman from Irving knew he’d see extended action with sophomores Kerwin Roach and Tevin Mack suspended for an undisclosed violation of team rules. Jones had 17 points, seven rebounds, five assists and just one turnover in 33 minutes.

Jones was aggressive when needed and distributed like a on-court quarterback should.

He broke free for a two-handed slam in the first half during a 21-0 run that broke things open. Just before halftime, Jones threw a great touch pass to Allen for a layup and followed that with a lead pass to Young on a runout.

“I know I had to grow up quickly,” Jones said. “This opportunity was great. Coach Smart has a lot of confidence and a lot of faith in me. I want to prove that I’m able and capable of running this team from the point guard position.”

On the summer league circuit, Allen was known for having big games in quiet fashion. He doesn’t make many highlight-reel plays. But the 6-11 forward just grinds away, scoring layups, grabbing loose rebounds and gobbling up one stat after another.

One particular move stood out. Allen had the ball just off the block but couldn’t get his footwork right. So he threw it back out, ran a simple pick-and-roll, got the ball back and drilled an 18-footer like it was nothing.

Allen finished with 14 points, 11 rebounds and five turnovers in 24 minutes. But he fouled out with 4:08 remaining and also went 3 for 11 at the free throw line. As a team, Texas was 17 for 33 (51.5 percent) at the stripe. Those kind of numbers give you heartburn.

“He will quietly dominate a game,” said senior Shaq Cleare, who piled up 12 points, 11 boards and looked good in the tighter Nike uniforms now that he’s shed more than 30 pounds during the offseason. “He doesn’t yell and do all that other stuff, but he’s a dominant guy.”

Cleare loved watching Banks dive on the floor for a loose ball in the first half. He tipped in an Allen miss and generally hustled all night long. The bench erupted when Banks got a two-handed jam late in the second half. The 6-10 freshmen is raw, but he’s a handful.

“This is not to rain on anyone’s parade, but every year, the freshmen play well in the exhibition game,” Smart said. “Every team I’ve ever been a part of, they play well. I don’t know why. I think some of it may have to do with playing a non-Division I team, so maybe it’s a little bit lower level competition.”

Last year’s three freshmen did go wild against Tarleton State in the exhibition game. Smart pointed out they were 4 for 32 shooting combined in the season opener against Washington.

It’s clear that all four freshmen this season will play a lot. Smart doesn’t have much choice, really. He lost five seniors, and junior guard Isaiah Taylor left to chase his professional dreams. Taylor texted Smart earlier this week and said, “I’m in damn near Mexico.”

“The difference for our team this year is we need those freshmen more than we needed the freshmen last year,” Smart said. “It’s very, very important over the course of the next nine days to continue moving those guys forward.”