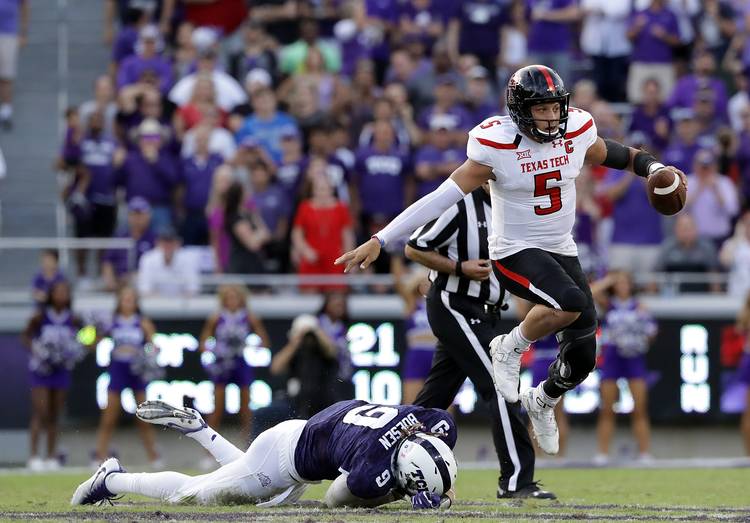 Patrick Mahomes II #5 of the Texas Tech Red Raiders runs for a first down on fourth against Mat Boesen #9 of the TCU Horned Frogs in the second half at Amon G. Carter Stadium on October 29, 2016 in Fort Worth, Texas. (Photo by Ronald Martinez/Getty Images)

On Saturday against Texas Tech, the eyes of Texas will be upon …

Two weeks removed from a performance in which he had 88 pass attempts in a loss to Oklahoma, Mahomes enters Saturday’s game as one of the nation’s top passers. Mahomes, who passed for 372 yards and threw for a touchdown and ran for another score, leads the country with 3,519 yards. He’s tied for third nationally with 28 touchdown passes and ranks ninth in pass efficiency (161.4).

Texas fans probably don’t remember Giles — he had two catches for 22 yards in last year’s game on Thanksgiving night — but they’ll probably see plenty of the sophomore on Saturday. Giles is Texas Tech’s leading receiver with 55 catches for 927 yards and 11 touchdowns. But he’s also coming off a sub-par game — two catches for only 10 yards last week against TCU.

Nelson, a senior, is still looking for his first interception of the season. But he has broken up nine passes, second-best in the Big 12 behind only Oklahoma’s Jordan Thomas (12). Nelson has three picks in his career. Texas Tech has four interceptions on the season, and the Red Raiders are allowing 304.6 passing yards per game.

Betting the Horns: This Texas-Texas Tech matchup has shootout written all over it

Shane Buechele is taking command at Texas with polite positivity