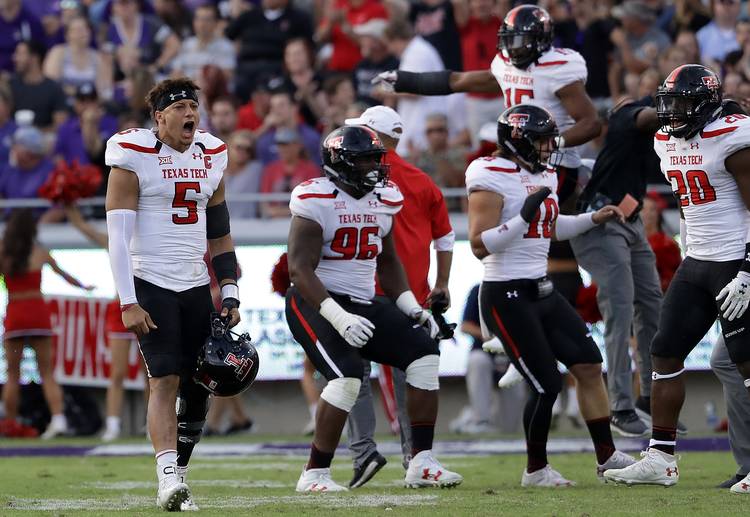 FORT WORTH, TX - OCTOBER 29: Patrick Mahomes II #5 of the Texas Tech Red Raiders reacts after the TCU Horned Frogs missed a field goal attempt in the second half at Amon G. Carter Stadium on October 29, 2016 in Fort Worth, Texas. (Photo by Ronald Martinez/Getty Images)

Each week, the American-Statesman will interview the beat writer of Texas’ opponent. This week, Lubbock Avalanche-Journal sports editor Nicholas Talbot offers insight on Texas Tech. You can find Nicholas on Twitter at @NicholasRTalbot.

At 4-4, has Texas Tech over-achieved, under-achieved or achieved what was expected of them in the preseason?

For many, they have under-achieved. They have one of the best quarterbacks in the nation with Patrick Mahomes II, but have failed once again to put an even average defense behind him. They have also lost key games at Arizona State and Kansas State, which many thought were winnable before the season began. Most Red Raider fans were looking for an improvement on last season’s 7-6 team, but if Tech doesn’t defeat the Longhorns, it will be hard-pressed to finish with a winning record, which could put Kliff Kingsbury on the hot seat, despite a large contract.

Is Patrick Mahomes II the best quarterback in the Big 12?

In terms of talent, there is no question that Mahomes is the best in the Big 12. But he doesn’t have the pieces around him to supplement his abilities. Tech has great inside receivers in Jonathan Giles, Cameron Batson and Keke Coutee, but have struggled with injuries to Dylan Cantrell, Derrick Willies, and once again Devin Lauderdale is nowhere to be found. Outside of the TCU win, Tech has also struggled to find a find an effective running game. A QB is usually a leader that wins games, and without those pieces, the best QB in the Big 12 is still perceived to be Baker Mayfield.

What did TCU (27 points) and West Virginia (17) do to this Texas Tech offense that every other defense has seemingly failed to do?

West Virginia brought pressure on what has been a weak offensive line for the Red Raiders this season. But TCU failed to do so, and instead dropped as many as eight men into coverage to stop Texas Tech’s passing attack. The move by Gary Patterson caught Kliff Kingsbury and the offense off guard and they had no real answer.

Defensively, what has been the biggest problem for the Red Raiders?

Name one Texas Tech player that Texas fans aren’t talking about — but should be.

Jonathan Giles. Does he even count? He is second in the Big 12 in receptions and receiving yards, but Mahomes gets all the attention. Also, Coutee, who after having three catches for 29 yards in the first three games of the season has caught 25 passes for 438 yards in his last five games.

Finally, any restaurant recommendations for the Texas fans making the trip to Lubbock?

If you are looking for a good steak (or country fried steak) or just a touch of Lubbock, the Triple J restaurant is always my favorite place to go. Plus, I am a sucker for crinkle-cut sweet potato fries. Those in the mood for Italian fare can hit up the Italian Garden or Orlando’s.  If you want Tex-Mex, go to Abuelo’s.