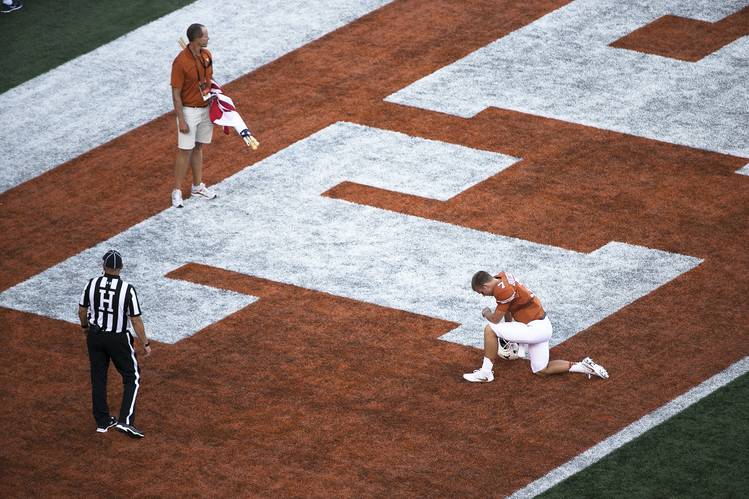 Shane Buechele is unfailingly polite. He’s not a cusser, teammates swear. He’s not an in-your-face personality. That’s just not how the Texas freshman is programmed.

Quarterbacks are supposed to cajole, comfort and condemn teammates just as much as coaches. It’s part of the job description. When the freshman does speak up, it’s usually something positive.

Take Kansas State, for example. Buechele threw a perfect pass to Armanti Foreman on fourth down that should have been a score. Unfortunately for the Longhorns, the ball crashed to the turf.

“He just told me, ‘It’s OK, it’s going to be all right,’” Foreman said. “He told me he knew I could make that play. He just kept believing in me.”

One week later, against Baylor, Buechele threw a ball slightly behind senior Jacorey Warrick. “He came to me and said, ‘Aw, my bad, Petey. I’m gonna be on point with the next one,’” Warrick said. “He’s always kind of cool and calm.”

The “young kid,” as Warrick called him, is quietly taking full command of the Longhorns. Buechele’s latest test comes Saturday in a duel against Texas Tech’s Patrick Mahomes, the nation’s leading passer, at Jones AT&T Stadium.

It’s a real moment of truth as two 4-4 teams square off with bowl implications at stake.

Don’t expect Buechele to stand up in the locker room and give a stirring pre-game address, though. This is an 18-year-old who has deferential respect to those who have come before him, seen and done much more. Despite rewriting the UT freshman record book, Buechele believes it’s not his place to say Texas is his team. Not yet, anyway.

“That’s a hard question,” Buechele said. “I don’t think that’s my job to do that yet. I want to be a leader on this team, obviously. I’m a big part of this team and I’m a leader. But I’ve said in the last few weeks, I need to be a more vocal leader.

“There are other guys, the senior leaders, that have been here that understand what’s going on here that fought through everything,” he added. “They’re still those guys. They still have that leadership on that role on this team.”

The individual quarterback matchup is lopsided in Mahomes’ favor. In 28 games spanning three seasons, Mahomes is closing in on 10,000 career yards and already has 80 touchdowns. Buechele has only eight games under his belt, but he’s on pace to become the Horns’ first 3,000-yard passer since Colt McCoy in 2009.

Buechele will break the UT record for most starts by a freshman quarterback on Saturday. One more victory, and he’ll tie Bobby Layne’s freshman mark of five wins as a freshman starter set in 1944.

More records are likely to fall in the coming weeks and years. Yet there’s not a whiff of arrogance or smug persona from a player who wears a cross around his neck.

Truth be told, Buechele is somewhat boring, which is probably how the coaches like it. Initially, Buechele told reporters he “simply wanted to execute” the offense. Why didn’t things work? “We didn’t execute.” After a while, you wanted to execute the execution of his executable answers.

Now with eight games under his belt, Buechele is growing comfortable with the media and learning “how to execute” Sterlin Gilbert’s offense at a higher level.

Texas runs the same offense as Baylor, seeing as how Gilbert learned it from former Bears coach Art Briles. On one particular play, the Bears shifted before the snap to confuse Buechele. The quarterback saw it and called and audible. The defenders shifted back, and Buechele checked back to the original plan. Coach Charlie Strong called it an “unbelievable check.”

“He has so much confidence,” Strong said, “and just knowing the offense and knowing where we need to put the ball, and put the ball in place for us to be successful.”

That cat-and-mouse game is something you rarely see a freshman, shall we say, execute.

Gilbert does not grade players each week, per se. He marks whether plays were good or bad. Buechele is the first true freshman quarterback he’s ever coached.

“Every game rep, every practice rep, every rep that he takes is a growth rep,” Gilbert said. “For Shane, everything’s new. Going to Lubbock on Saturday, that’s new.”

Gilbert does not have a traditional playbook. It’s a read-and-react offense based on the defensive formation. Gilbert once likened it to muscle memory. For example, if the safety does this, the quarterback does that. There’s little to think about, really.

Actually, Gilbert has said he really doesn’t want the quarterback thinking much at all. It’s a system designed to highlight a quarterback’s individual athleticism.

“You definitely don’t try to think about it. It’s just a reaction,” Buechele said. “That’s what you want it to be. You don’t want to think too much. You want to just react to what’s going on.”

It’s all about, ahem, execution. So far, Buechele seems to be handling it just fine.

The Eyes of Texas: Three Red Raiders the Horns will be watching