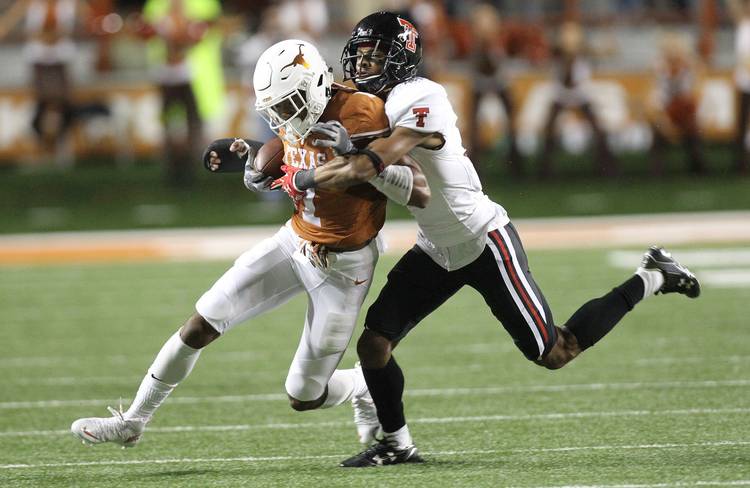 D’ONTA FOREMAN VS. ONE OF THE BIG 12’S WORST RUN DEFENSES

The good news for Texas Tech? Chris Warren III, who rushed for 276 yards in last year’s game between these two schools, has been sidelined by a knee injury since early October. The bad news? Foreman entered this weekend as the Big 12’s only 1,000-yard rusher, and he’s looking for his 10th straight 100-yard performance. Among Big 12 teams, only Iowa State is yielding more yards on the ground than Tech, which is gifting opposing teams 213.8 yards each outing.

Mahomes leads the nation with his 3,519 passing yards — and Toledo’s Logan Woodside, who’s No. 2 in the country, has 3,042 yards and has played one more game than Mahomes. Mahomes has topped 450 passing yards in five of his eight games. At 258.5 yards per game, Texas ranks fifth against the pass in the Big 12. Three of the four teams rated below the Longhorns, though, have already played Texas Tech.

Texas Tech is allowing 304.6 passing yards per game, and Oklahoma’s Baker Mayfield (545 yards), Arizona State’s Manny Wilkins (351), West Virginia’s Skyler Howard (318) and Louisiana Tech’s Ryan Higgins (311) have already had field days against the Red Raiders. There is no reason to believe that Texas won’t rely on its running game, but will Buechele — the three-time Big 12 newcomer of the week — get enough chances to earn his first 300-yard game?

Forget Hager’s “injure that quarterback” comment and the ensuing apology from early this week; Texas Tech likely had Hager on its scouting report before the sophomore defensive end made news with his comments on Monday. Only Alabama has sacks this season than Texas, which has taken down quarterbacks 31 times. Leading the way is Hager, who has compiled a team-high five sacks. Hager will attempt to extend his sack streak to four games against a Tech team that has allowed 21 sacks.

TEXAS ON THE ROAD VS. TEXAS TECH AT HOME

Texas has earned victories in four of its last five trips to Lubbock, but the Longhorns have struggled on the road this season. Texas is 0-4 away from Austin, and the team has dropped a seven-point decision (California), an 18-point game (Oklahoma State) and a three-point call (Kansas State) in its true road contests. Texas Tech is 3-2 at home, but the Red Raiders are attempting to snap a two-game skid at home.

Staff takes: If the stakes in Lubbock are higher, will that help Texas solve its road problem?