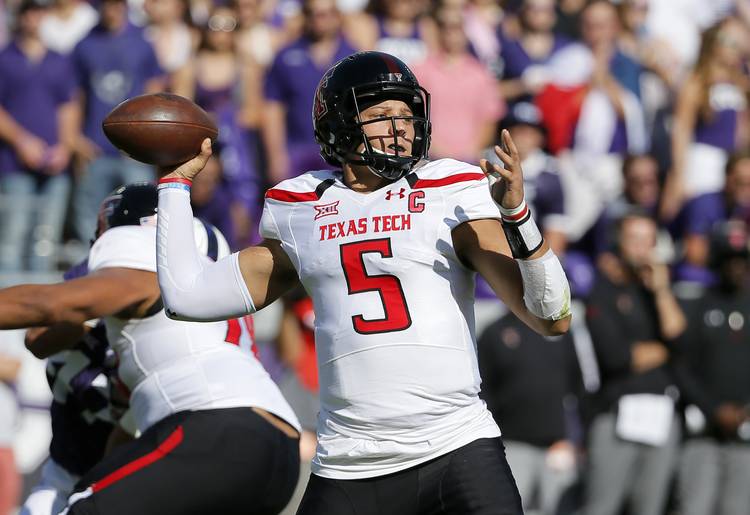 Texas Tech quarterback Patrick Mahomes II prepares to throw a pass in the first half of an NCAA college football game against TCU on Saturday, Oct. 29, 2016, in Fort Worth, Texas. (AP Photo/Tony Gutierrez)

1. Will Texas make a game-opening stop?

In eight games, Texas has won six coin tosses. Each time, the Longhorns have deferred to the second half, opting to open the game playing defense. And the other two times, Notre Dame and Baylor won the flip and chose offense, putting Texas on defense anyway. In five of those eight games, Texas has given up a touchdown on the opponent’s first drive (Notre Dame, Cal, Oklahoma State, Kansas State and Baylor), and Oklahoma missed a field goal. Texas Tech has been hit or miss when it comes to first drives of games; the Red Raiders have scored four times in their eight opening-game drives, but have committed turnovers in their last two games.

At 500.6 yards per game, Texas Tech has the nation’s No. 1-ranked passing attack led by the nation’s passing leader. Patrick Mahomes II has thrown for nearly 600 more yards than the next closest quarterback out there, and even backup Nic Shimonek turned 15 completions into 271 yards against Kansas. But Tech also has the Big 12’s worst rushing offense, with Demarcus Felton’s 289 yards leading the team. Texas has struggled against the pass, but also just surrendered 398 rushing yards to Baylor, including 100-yard games from a quarterback and a running back. Will Texas Tech switch it up on offense at all and see what it can do on the ground?

3. Where will Jake McMillon line up?

McMillon, a sophomore, has started three of Texas’ eight games. But the Longhorns sure have spread him around. McMillon subbed in at Oklahoma State for suspended right guard Kent Perkins, replaced an injured Zach Shackelford at center at Kansas State, and played in place of benched left guard Patrick Vahe against Baylor. Texas’ depth chart for the Texas Tech game has either McMillon or Vahe starting at left guard. He’s also listed as Shackelford’s backup at center.

4. Will Texas’ special teams help out the offense?

Michael Dickson is one of the country’s top punters, Trent Domingue’s 11th field goal of the season was last week’s game-winner over Baylor, and Mitchell Becker has performed well on kickoffs. The kicking specialists, though, only make up a part of Texas’ special teams. Texas has yet to settle on returners; eight different Longhorns have returned at least two kickoffs, and Devin Duvernay, who’s averaging 21.4 yards per attempt, ranks only 70th in the country. Texas isn’t faring much better on punt returns, where Armanti Foreman (8.6 yards per return) and Jacorey Warrick (7.1) have been the best options.

Shane Buechele is taking command at Texas with polite positivity