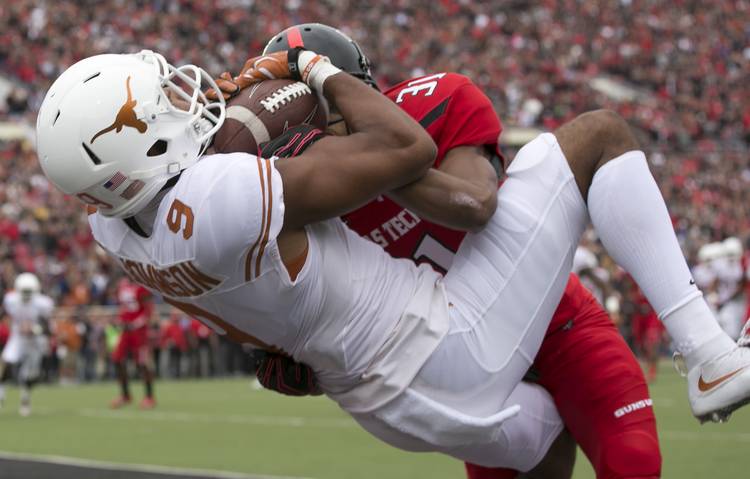 LUBBOCK — Throughout this season, several wide receivers have made their case to be Texas’ leading man in the ensemble cast that is the Longhorns’ receiving corps. On Saturday, it was Collin Johnson’s turn.

The freshman from California had four catches for 47 yards in Texas’ 45-37 win over Texas Tech. That included two acrobatic touchdown catches, the first of his college career. Johnson, the son of former Longhorns All-American defensive back Johnnie Johnson, had only 13 catches in Texas’ first eight games.

“I can only control what I can control, so every day in practice, all I can do is bring a good attitude,” Johnson said. “Whether I’m catching two touchdowns or catching no touchdowns, I’m just going to approach every game and every practice the same. Today, I was on a positive side.”

Johnson and fellow freshman Shane Buechele got to work in the first quarter, connecting on a 16-yard touchdown pass that saw Johnson get his left foot in the end zone before he fell out of bounds. Texas ran the same play in the second quarter, and they got the same results. Corner route. Foot down. Touchdown (albeit one from nine yards out).

Johnson was even impressive on non-touchdowns. The 6-6 receiver dropped a pass in the third quarter, but Buechele went back to him on the next play. The 16-yard catch kept the Longhorns moving on a half-opening drive that Tyrone Swoopes capped with a touchdown run.

“It’s always exciting being able to see him shine like he did,” Buechele said. “Putting that ball up to him with his frame (and) seeing him come down with it, it’s a lot of fun.”

Johnson said the receivers often work on toe taps in practice, but figured that footwork comes to him naturally. Johnson also shrugged off a question about his matchup with Texas Tech defensive back Justis Nelson on those two touchdown catches. Johnson had four inches on Nelson, who came into the game ranked second in the Big 12 with his nine pass breakups.

Johnson’s focus on Lubbock was simply on catching the football.

“My dad always told me to just act like you’re going against the best DB every time,” Johnson said. “I don’t even know what number (was covering me), I couldn’t tell you. I was just focusing on my route, and what I had to do. Shane, he placed a good ball on both of them, where only I could get it.”

Johnson’s four catches led the team in the 24-21 loss at Kansas State. Two weeks later, he used another four-catch game to catapult himself into a tie with Leonard for fifth place on the Longhorns’ receptions list. Both have 17 catches.

“He showed up today. He made some plays when he had opportunities,”  offensive coordinator Sterlin Gilbert said. “He was able to obviously pull in some big touchdowns for us tonight. He’s a kid that really has grown and will continue to get better.”

Third and Longhorns: Inside Texas-Texas Tech