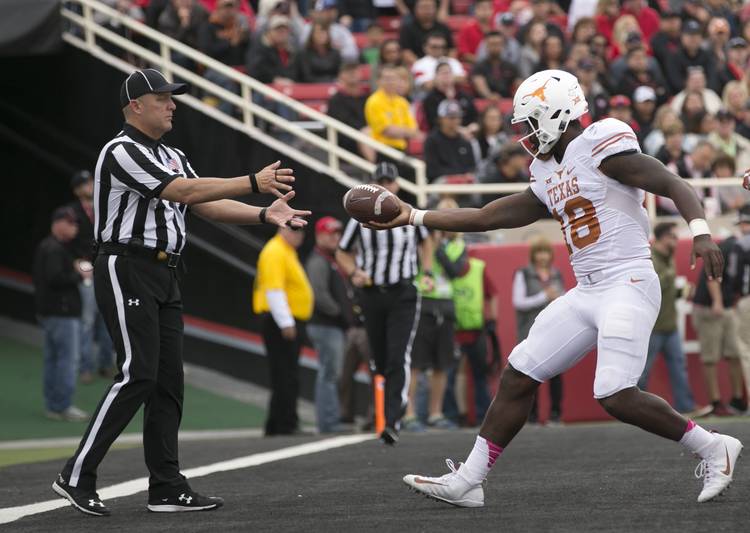 Texas Tech 16, Texas 14. Collin Johnson’s 18-yard, keep-your-foot-in bounds touchdown catch was the first of his college career, and it came one drive after Jake Oliver had a career-high 52-yard reception. Texas, though, had no answer for a Texas Tech offense that saw the Red Raiders score on their first three possessions.

Halftime: Texas 24, Texas Tech 23. After surrendering 212 yards in the first quarter, Texas kept the Texas Tech offense off the scoreboard in the second. The Red Raiders, though, still found a way to score. What should have been a 99-yard Texas drive ended in disaster when D’Onta Foreman was stripped of the ball just as he was crossing the end zone. Texas Tech scored on the 100-yard fumble return, turning a 21-16 Texas lead into a 23-14 Tech advantage.

Texas 38, Texas Tech 30. Swoopes picked up his seventh touchdown of the season and Foreman got his 12, and Texas maintained control of the scoreboard. The play of the quarter, though, was a gutsy fake punt from Tech’s 27. It went for 25 yards and a first down. The Red Raiders had a chance to tie the game in the quarter’s final minute, but John Bonney forced a Derrick Willies fumble inside the Texas 20.

The key play: On an 11-play drive that didn’t have a single third-down test, D’Onta Foreman’s 16-yard run down to Tech’s 9-yard line brought in the 18-Wheeler.

The key play: It would have been a gutsy fake punt run of 25 yards from Tech’s own 27-yard line — until Malcolm Roach was later flagged 15 yards for a horsecollar penalty that moved Tech to UT’s 20.

The key play: That was it, really, though Foreman did have a pair of 12-yard gains. He had 65 yards on the drive.

Final: Texas 45, Texas Tech 37. Both teams had chances to take control of this game, but the pressure only built with every passing punt. Foreman went over the 300-yard mark, but was injured midway through the quarter, and his backup lost a fumble while he was out. The 18-Wheeler scored in the third quarter, but Swoopes was stuffed on back-to-back third-and-1 and fourth-and-1 tries for no gains late; the conversion likely would’ve sealed it.

The key play: That was it. It also put Foreman over the 300-yard mark for the game.

The key play: Really, it was Kyle Porter’s fumble that made it all possible; Tech started its drive at Texas’ 37.

Third and Longhorns: Inside Texas-Texas Tech