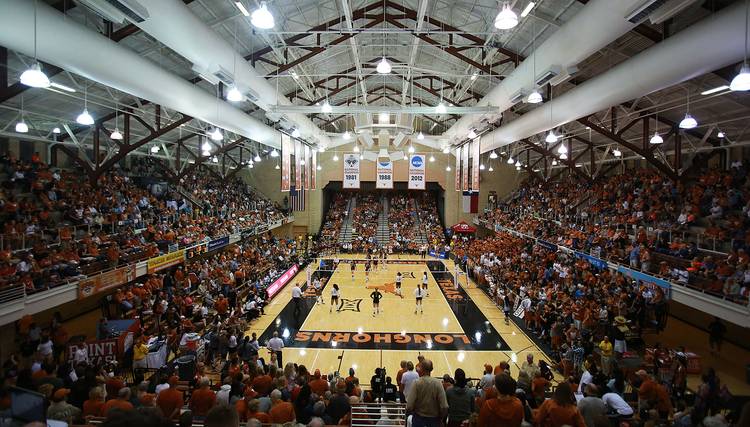 This is what Gregory Gym might look like for Texas women's basketball --- a packed house like the Longhorns' volleyball team routinely gets. (Stephen Spillman / for American-Statesman)

Despite having a Top 10-caliber team, students at the University of Texas have not flocked to the Erwin Center to watch women’s basketball in recent years.

So, the women’s basketball team has decided to take its game to the students.

For at least a day.

Texas will have a dress rehearsal for the 2016-17 season with an exhibition Sunday afternoon. But instead of playing at the 16,540-seat Erwin Center, the Longhorns will play host to Tareleton State on campus at 4,000-seat Gregory Gym.

No one can deny that coach Karen Aston’s team has developed into a national contender. After the Longhorns went 12-18 in her first season, they are a combined 77-28 the past three years and have reached the NCAA Tournament each time.

Now in her 15th year as Texas women’s athletics director, Chris Plonsky said this “throwback game” (against TSU) is an attempt to attract students who have not seen the Horns at the Erwin Center.

“Sometimes you have to fish where the fish are,” Plonsky said.

Texas officals said there are no plans to use Gregory Gym, built in 1930, for regular-season games. The gym was used by Texas’ basketball and swimming teams until the Erwin Center and Lee and Joe Jamail Texas Swimming Center were built in 1977.

“Playing at Gregory is really about the student body,” Aston said. “Do we want to play there every game? No, because we hope that we have more people that want to come see us play that can fit into Gregory…. Attendance from our students has been a missing piece and we’d love to have more of them come to our games.”

The goal is to get “cheeks in the seats,” said Harris, a 2007 inductee into the Texas Women’s Hall of Honor.

Several factors have led to the decline of ticket sales over the years, she said. The “core” of fans who packed the Erwin Center in the 1980s and 1990s during Hall of Fame coach Jody Conradt’s tenure has gotten older, and UT is searching for “new blood.” Parking has been a nagging issue with hospital expansion adjacent to the arena. Furthermore, there are a lot of entertainment options in Central Texas.

“Austin is not the sleepy little town that it was in the ’90s,” Harris said. “There are a lot of fun things happening here. We have a lot of competition for how people spend their discretionary dollars.”

Senior post Kelsey Lang and junior point guard Brooke McCarty said they are eager to play at cozy Gregory Gym. As for the Erwin Center, Lang said she wishes the lower half of the arena (capacity: 7,700) would be filled regularly.

“We’ve put ourselves in a position (as an elite program) where families should want to see us play,” Lang said. “Maybe if they come to a game just once, they’ll want to come back.”