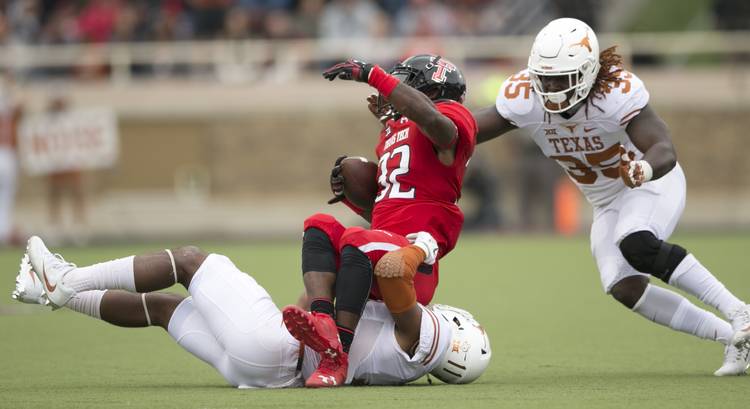 On Saturday morning, we asked four questions about the Texas-Texas Tech matchup.

1. DID TEXAS MAKE A GAME-OPENING STOP?

Texas Tech’s passing game looked as good as advertised. Patrick Mahomes zipped the Red Raiders downfield, connecting on passes of 17, 15, 11 and 12 yards. All to different receivers. Texas has now opened every game — that’s nine games — on defense; the Longhorns have won six coin flips and deferred to the second half each time, and opponents have won three coin flips and each opted to take the opening kick. That included Saturday. So of those nine opening drives, there have been six touchdowns and one missed field goal given up by the Texas defense. Tech had been hit or miss all season when it comes to first drives; Saturday’s opening touchdown drive snapped a two-game streak that saw the Red Raiders commit turnovers on their first drive.

And the Red Raiders nearly produced a 100-yard rusher. Texas Tech had 41 carries out of its 100 offensive snaps; the obvious strength-vs.-weakness matchup leaning toward Tech’s favor was Mahomes and the Red Raiders’ No. 1-ranked passing attack against a Longhorns secondary that had been shredded by Cal, Oklahoma State and Oklahoma. Texas gave up 398 rushing yards to Baylor last week, and Tech had some success with Da’Leon Ward, who finished with 93 yards. Still, Tech averaged only 2.8 yards per carry.

3. WHERE DID JAKE MCMILLON LINE UP?

Texas’ versatile offensive lineman made his fourth start Saturday, and his second straight at left guard in place of Patrick Vahe. So far, McMillon has played right guard (Oklahoma State) when he subbed for the suspended Kent Perkins, center (Kansas State) in place of the injured Zach Shackelford, and left guard. McMillon left the game on the first play of the fourth quarter, on D’Onta Foreman’s 74-yard touchdown run.

4. DID TEXAS’ SPECIAL TEAMS HELP OUT THE OFFENSE?

There wasn’t a notable kick or punt return to speak of. The Longhorns continue to try to settle on someone reliable back there; at Tech, that was Jacorey Warrick and Lil’Jordan Humphrey. As has usually been the case, Texas’ kicking game was solid. Michael Dickson, one of the country’s top punters, averaged 51 yards on five punts. That included a 63-yarder and a 40-yarder that was downed at Tech’s 5-yard line. Trent Domingue, who beat Baylor last week with a final-minute field goal, hit a 29-yarder against Tech, his 12th of the season.