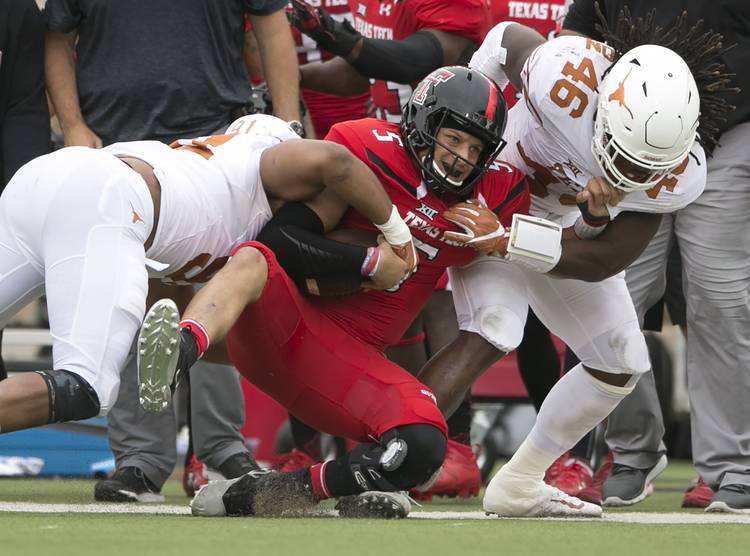 WHY TEXAS (5-4, 2-3) WON: D’Onta Foreman. This is really saying something, but he had his best game of the year — 33 carries for 341 yards and three touchdowns — and produced Texas’ longest touchdown of the season (74 yards) and the first-, second- and fourth-longest overall runs of the season (74, 55, 38). He averaged 10.3  yards per carry. And, though the final numbers won’t necessarily say it, Charlie Strong’s defense showed up in Lubbock at key times by way of a timely tackle, stop, pressure, tipped pass or turnover. Sterlin Gilbert called a really nice game for three-and-a-half quarters, though the home stretch was an adventure. We’re still trying to figure out why Foreman was on the sideline for critical third-and-1 and fourth-and-1 stops for no gains from the 18-Wheeler.

WHY TEXAS TECH (4-5, 2-4) LOST: OK, let’s go ahead and say the Red Raiders received two questionable ball spots on the final drive, including the game-deciding gain of no yards on Patrick Mahomes’ fourth-and-inches keeper in the final minute. But that’s not why Tech lost. The inability to finish drives — Tech punted five times, and lost two turnovers — and connected issue of converting third downs is what doomed the Red Raiders. Tech had been converting nearly 60 percent of its third-down chances, but was only 7 of 19 on Saturday. And for all the talk about Tech’s high-powered offense, the Red Raiders were outgained, 658-482 yards.

THE EYES OF TEXAS: … were on three specific Red Raiders — Mahomes, the nation’s leading passer who was tied for third nationally in touchdown passes; Jonathan Giles, Texas Tech’s leading receiver (55 catches for 927 yards and 11 touchdowns heading into Saturday’s game); and defensive back Justis Nelson, who was ranked second in the Big 12 with nine pass breakups.

Mahomes was 36 of 59 for 367 yards and three touchdowns. And there was the costly interception at the end of the game.

Giles had five catches for 55 yards and a touchdown, a nifty tiptoe-down-the-sideline score. But he also made a critical mistake at the end of the third quarter, mistiming his leap to catch a Mahomes pass over the middle when he was wide open. Tech turned it over on the next play.

Nelson had five tackles and two more pass breakups to add to his conference-leading total, including one that broke up a touchdown pass to Jerrod Heard late in the second quarter. But on the very next play, he was beaten by Collin Johnson for a touchdown.

Offense: D’Onta Foreman. Is there really any reason to doubt he won’t have an 11th straight 100-yard game next week at home to tie Earl Campbell’s 39-year-old UT record?

Defense: John Bonney. Malik Jefferson, who led the team in tackles for the second straight week, was solid. But Bonney forced a big fumble that took away probable points for Tech and later broke up a touchdown pass in the end zone.

(1) Poona Ford finished with three tackles and a quarterback hurry, but it was his block of a Texas Tech extra point in the first quarter that played a big part in the game; because of that block, Tech ended up being 8, not 7, points back at the very end.

(3) Waitaminute. Texas won … on the road? The Longhorns improved to 4-1 away from Royal-Memorial Stadium, a win that also improved them to 5-4 overall, which means they’re only one win away from bowl-eligibility with West Virginia, Kansas and TCU left to play.

TEXCETERA: Texas improved to 50-16 all-time vs. Texas Tech, including a 20-10 record in Lubbock. This was Texas’ seventh win over Tech in their last eight matchups. … The 658 total yards were a season-high for Texas, which tied the 2005 and 2009 teams with six 500-yard games in a season. … Texas’ 414 rushing yards were the most for a Longhorns team since 2007. … Foreman’s 33 carries, 341 yards and three touchdowns all were single-game career highs, and it was the third-best rushing day in UT history.

ON DECK: WEST VIRGINIA (Nov. 12, Royal-Memorial Stadium). Texas is 4-0 at home, including a pair of wins over top-10 teams, and getting the road win Saturday will only make the Longhorns more confident. Needing only one more win to become bowl-eligible will make this an even bigger matchup than usual. The Mountaineers have been one of the Big 12’s big surprises this year.