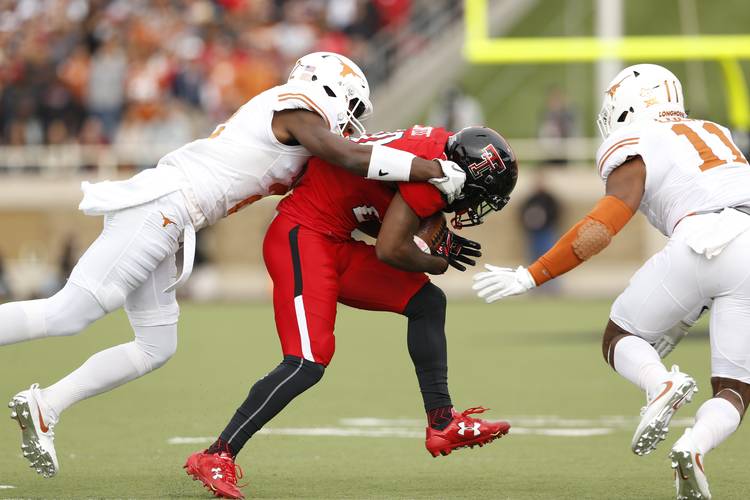 LUBBOCK — Everything is relative in the bizarro world that is Big 12 football.

Oklahoma, owner of the best house in a bad neighborhood, is on pace to allow more than 400 yards for the first time in school history.

In fact, seven Big 12 teams allow more than 400 yards per game, a first since the league dropped down to a 10-team format in 2011. The Big 12’s best defense —  Kansas State — allows 392.8 yards, the 54th-best figure in the nation. This comes one year after the Wildcats allowed the most yards in school history.

Make no mistake, Big 12 defenses are a motley lot. But as odd and upside-down as this sounds, the Longhorns appears to be getting better since head coach Charlie Strong took over the play-calling duties five weeks ago.

“We’re definitely coming together,” nickel back P.J. Locke III said after Texas’ 45-37 road win over Texas Tech. “We had a lot of negativity coming toward the defensive unit, the DBs specifically. We never kept our head down, just always looked for improvement after every game. We came together and you guys can see that.”

In Texas’ last five games, opponents came in averaging 37.7 points. The Longhorns are allowing just 29.2 with Strong at the defensive controls. Baylor and Texas Tech both finished about 10 points below their season average.

Texas and TCU are tied at the top of the conference with 34 sacks. The Horns sacked Texas Tech’s Patrick Mahomes three times at Jones AT&T Stadium. Malik Jefferson, serving as a spy, had 1.5 sacks along with a team-high eight tackles. Edwin Freeman had two of the team’s five tackles for loss.

What’s really helped the secondary is going away from the aggressive bump-and-run coverage utilized earlier this year.

Cornerbacks are now giving plenty of cushion. Strong and his defensive staff, not to mention the players themselves, got tired of seeing receivers race by and catch balls over the top. That change is now reflected in the passing numbers.

Oklahoma’s Dede Westbrook performance at the Cotton Bowl was the final straw — or should have been, anyway. Westbrook had 232 receiving yards in OU’s 45-40 win. In the last four games, Texas’ secondary has allowed 236.5 passing yards, a manageable total in this league.

“If that’s not motivation for us, then I don’t know what will,” cornerback John Bonney said. “So, I feel like we’re heading in the right direction because we played well against some really good passing offenses.”

Against the Red Raiders, Strong admitted the man-to-man coverage used early wasn’t working. Mahomes was 15 for 18 for 178 yards and had two touchdowns in the first quarter alone. So the Horns went to zone coverage, started disguising things and spied with Jefferson.

Strong said he wanted the defensive tackles to force Mahomes from the pocket, “and the linebackers go run him down.”

In the final three quarters, Mahomes completed just 51 percent of his throws for 189 yards. His longest play of the day was a 31-yard pass by Derrick Willies.

All in all, the Texas defense had a pretty successful day on the South Plains.

The fact that Kris Boyd made the game-ending interception in the end zone was a fitting capstone. Last season, Boyd made news for tweeting at halftime of the TCU debacle and some ill-advised penalties. But his sheer aggressiveness is hard to ignore.

“We just had a mindset that we’ve got to take what’s ours. We’re just on a mission,” Boyd said after the Tech win. “You’ve got to want it, and we want it. We’re just pushing, working together.”

Here’s a sign of how well the Texas defense is playing of late: if things go differently at K-State, this team would be riding a four-game winning streak.

But that’s the bizarro world of Big 12 football.

“We should have won that game,” Boyd said of the K-State loss, “but we’ve got to put the past behind us and move on.”