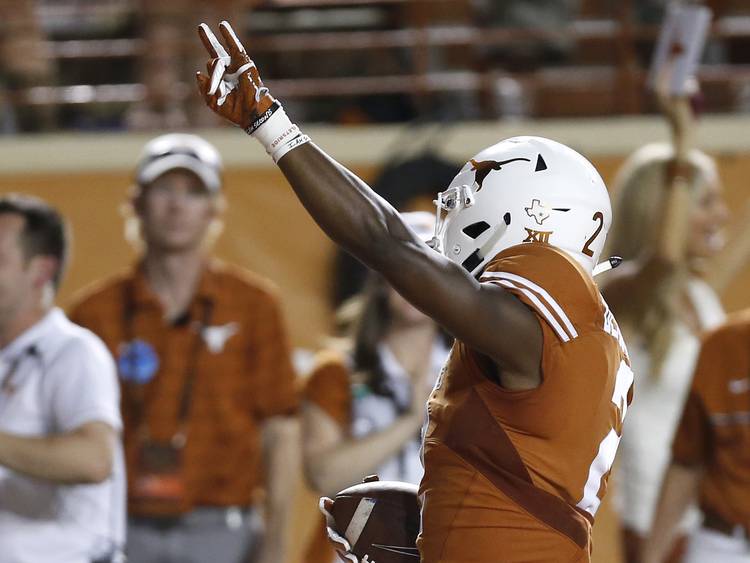 On Saturday, a Texas Tech touchdown turned out to be a highlight for the Longhorns.

While speaking to the media on Monday, Texas coach Charlie Strong said a critical play in a 45-37 win over Texas Tech was the Red Raiders’ touchdown off a 100-yard fumble return. On that second-quarter play, Texas running back D’Onta Foreman was stripped as he approached the Texas Tech goal line. Texas Tech freshman Douglas Coleman then ran the length of the field for a 23-14 lead.

So why was this play a “shot in the arm” for the Longhorns?

Strong said he was impressed by freshman receiver Devin Duvernay, who attempted to run down Coleman on the play. Duvernay was lined up on Texas’ side of the field — Coleman streaked down the Texas Tech sideline — but he caught up to the Red Raider defensive back. Replays indicated that Coleman was chased out-of-bounds at the Texas 2, but officials did not overturn the touchdown.

“I just think that was a turning point,” Strong said. “That swing could have been a swing (that) we could have not recovered from. They watched his effort, and then everybody on the sideline kind of got juiced.”

Texas went 3-and-out on its next drive in the second quarter, but the team responded with a 10-0 run before the halftime intermission. The Longhorns never trailed in the second half.

Following the win on Saturday, freshman quarterback Shane Buechele joked that on the play he “handed the baton off to Devin to go try to get him.” Fellow receivers Jacorey Warrick and Jake Oliver agreed with Strong that Duvernay’s effort energized the Texas sideline.

“Just seeing him take off and the flash of lightning, it really just pumped us up,” Warrick said. “Even the play being an unfortunate play for us, (he showed) how the tempo of the game was going to be.”

If shouldn’t be a surprise that Duvernay caught up with Coleman. Duvernay was clocked at 10.27 seconds in the 100-meter dash during his junior year at Sachse High. Duvernay is averaging 23.1 yards per catch, and his 80- and 75-yard touchdown catches are Texas’ longest plays this season.