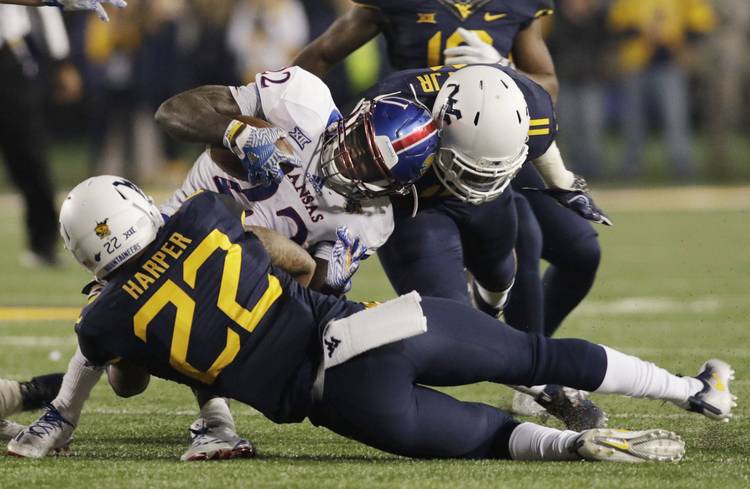 The fierce play of the West Virginia defense, with its three fleet linemen and a stacked trio of linebackers, has been one of the prime success stories of the Big 12.

The Mountaineers already have handled the league’s top passing offense, limiting Texas Tech to only 17 points. And Tech had rolled into the contest owning an NCAA record streak of scoring at least 50 points in nine straight games.

Now, West Virginia’s defense will see how it thrives on the road against Texas, which features D’Onta Foreman, the national leader in average rushing yards per game.

Might the Mountaineers’ 3-3-5 scheme, which is built mostly to deal with the league’s hot passing offenses, droop as they try to drop a 249-pound power runner like Foreman?

WVU coach Dana Holgorsen believes his guys will survive the task, stay in the Big 12 race and move on to deal with Oklahoma and its own top tailbacks Joe Mixon and Samaje Perine.

“Traditionally, we have done fine,” Holgorsen said. “I think we do a good job of scheming them up. Part of the advantages of a three-down front with stacked linebackers is being able to chop things up up front.

Physics would suggest that someone with Foreman’s mass and velocity would generate too much momentum against an undersized line of three. Foreman rushed for 147 yards a year ago against West Virginia. That was his second game of what has become a 10-contest streak of outings of at least 100 rushing yards.

And if Foreman starts winning the matchup, West Virginia could turn to its own time-consuming running game.

That’s how the Mountaineers won the game a year ago, even with the pounding they were taking from Foreman. Quarterback Skyler Howard attempted only 12 passes in the 38-20 victory. He completed 10 of them, two for touchdowns. But West Virginia’s rushing game generated 264 yards.

And WVU is capable of doing the same again Saturday. Leading rusher Rushel Shell still could be hobbled by a high ankle sprain. With Shell sidelined last Saturday against Kansas, the Mountaineers had two runners achieve 100 yards. Howard, who is 16th nationally in total offense, played a part in five touchdowns against the Jayhawks.

‘Welcome back’: How Malik Jefferson’s mother helped him snap out of his funk