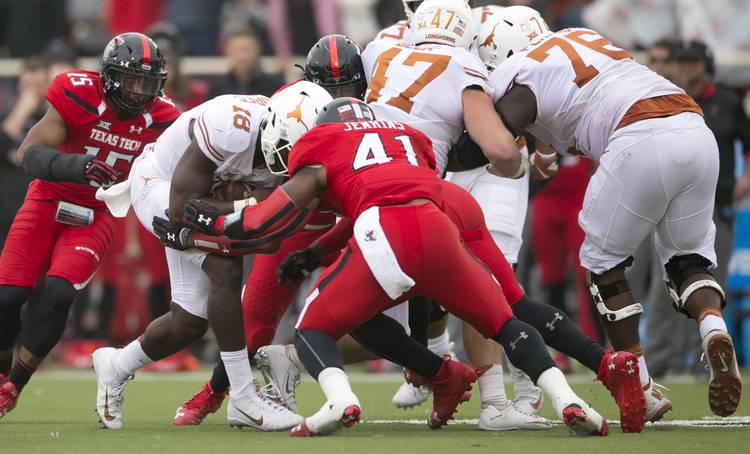 Speaking with reporters on Tuesday, Gilbert said he went with Tyrone Swoopes on third-and-2 and again on fourth-and-1 because the Longhorns had success with it earlier in the game.

“We’ve got a lot of belief and confidence in that package and utilize it for what it is,” Gilbert said. “That’s what we felt confidence in.”

Swoopes was stopped short on both attempts while running back D’Onta Foreman stood and watched from the sideline. Foreman had a career-high 341 yards against the Red Raiders. It was the third-greatest rushing performance in Texas football history.

Fortunately for the Horns, it all worked out in their favor. Texas cornerback Kris Boyd intercepted Tech’s Patrick Mahomes in the end zone with 9 seconds left to close out a 45-37 victory.

Had Tech come away victorious, Gilbert would probably be facing some serious heat for using Swoopes over Foreman at crunch time.

Fox Sports 1 broadcaster Tim Brando didn’t pull any punches on the national broadcast. “I’m as big a fan of Charlie Strong as any of you are,” Brando said. “But that’s the kind of play call that gets you fired.”

Gilbert said he didn’t know about Brando’s comment, but it didn’t bother him in the least.

“No, it doesn’t,” Gilbert said. “I didn’t even know he made the comment, so that shows you how much I care about that.

“My job is to put us in situations to have success, to set our kids up for success and score the amount of points that we did on Saturday and produce the amount of yards that we do on Saturday,” he added. “My No. 1 concern is all of our kids right here at the University of Texas.”

Texas’ P.J. Locke III is making the most out of his minutes