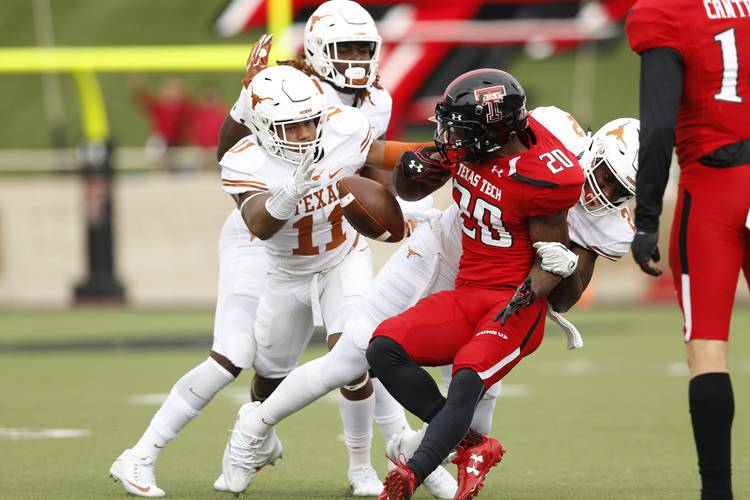 Locke, a sophomore defensive back for Texas, also is on Facebook. Since the sixth grade, in fact, he’s listed being a defensive back at Texas as his occupation. Locke doesn’t get on Facebook often, but won’t be editing that job description anytime soon.

Locke, who has started six games this season, has made significant contributions over the past two weeks against Baylor and Texas Tech. He recorded the first interception and fumble recovery of his career in a 35-34 win over Baylor on Oct. 29. In last week’s win at Texas Tech, he turned in four tackles and a pass breakup.

“We had to play a lot just because of what they were giving us, and we knew they were going to throw the ball around,” Strong said of last week’s game plan. “With our defensive backs, they know if they just continue to work, they’re going to get a chance.”

Despite his Facebook account’s longstanding ties to the Longhorns, Locke was once a member of Oregon’s 2015 recruiting class. Texas, though, got Locke to flip his commitment on signing day. He’s expected to make his eighth career start Saturday against West Virginia.

The 5-10, 200-pounder made his college debut in the 2015 season opener at Notre Dame. He eventually was moved from safety to nickel, and he made his first start in the season finale at Baylor.

The move to nickel was a return to familiarity for Locke, who played three different positions during his time at Beaumont Central. A safety as a sophomore and a cornerback as a senior, Locke lined up at nickel during his junior year. “I label myself as a safety that can cover like a corner and hit like a linebacker,” he said.

“At nickel, everything happens a lot faster,” Locke said. “When I went back to safety, it just seemed like everything was happening so slow. At nickel, it’s just a different story because you’re right there at the line of scrimmage.”

Locke’s given name is James, but he goes by P.J. — short for Pookie Jr. — because of a nickname that was given to his father, himself a former defensive back at Oklahoma State. Locke’s family members call him P.J. But Pookie is a nickname that coaches, teammates and fans have discovered since Strong let that name slip last year while introducing him at an alumni gathering.

On Saturday, a West Virginia offense averaging 287.1 passing yards per game will probably only know him as No. 11.

Sterlin Gilbert: Longhorns still have ‘a lot of belief’ in 18-Wheeler