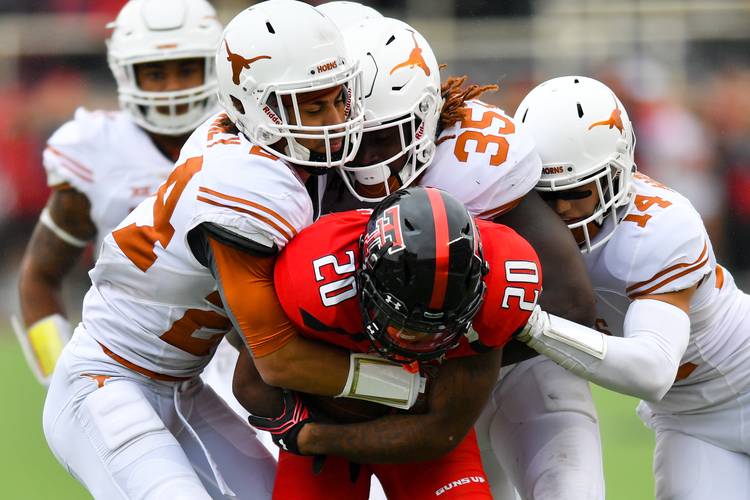 To paraphrase Supreme Court Justice Potter Stewart, progress is hard to define. But we know it when we see it.

Texas coach Charlie Strong’s harshest critics won’t be satisfied until his football program is once again a mainstay in the national spotlight. In many respects, that’s a valid expectation.

His most ardent supporters believe the young Longhorns still need more time to develop. More than half of the starting 22 offensive and defensive players — almost all coming from top-10 ranked recruiting classes — are underclassmen.

That brings us to Saturday’s home game against West Virginia, a team ranked 16th in the College Football Playoff rankings but 11th in the Associated Press Top 25. Either way, the Mountaineers (7-1, 4-1 Big 12) are the best team left on the Longhorns’ schedule.

The Horns (5-4, 3-3) are riding a two-game winning streak and, after forensic study of the Kansas State game, they arguably should be winners of four straight. That sounds like progress.

“Our offense has been playing with a lot of confidence,” Strong said. “To see both phases, even in the kicking game, all three phases beginning to play with some confidence.”

The difference in CFP and AP rankings are important. Most of the college football world recognizes the CFP rankings at this point since that determines the playoff participants. However if Texas wins, it will be the team’s fifth straight win over a top-12 team in the AP rankings.

Taken at face value with no context, that’s a terrific sign of progress. Of course, mixed among those wins are losses at Iowa State, Oklahoma State and a 672-yard defensive disaster against Oklahoma.

“I just hope we keep on growing as a group,” defensive end Malcolm Roach said. “We came in as one big family and we’re just getting tighter every week.”

Those family dynamics were tested this week, thanks to the election. Some Texas players got drawn into social media wars over their political views, including some against former teammates. It was a week full of distractions for UT students everywhere on campus and beyond.

I wanna leave America too right now Bc I'm sick of all the bitching. People in The Darfur with nothing don't bitch. Earn the Right to bitch!

But that shouldn’t detract from the mission at hand. Texas can become bowl-eligible with a win, and Strong can take another step toward securing his place in 2017. Momentum is already shifting toward keeping the current coaching staff in place. He can’t afford a major misstep now.

Practically every lower-tier bowl out there would welcome the Longhorns. The Russell Athletic, Texas, Liberty, Cactus and Armed Forces Bowls are all up for grabs at this point.

There is still plenty of downside remaining with a loss. The Horns would then sit .500 with two games left. Talk about enormous pressure. The program has not had three consecutive losing seasons since 1936-38.

Set aside the statistics and go on the eye-ball test. The Texas defense is playing better in recent weeks with Strong calling the shots. Baylor and Texas Tech were both held about 10 points below their season averages. That looks like progress.

“I think it’s a confidence deal,” said Joe Wickline, the former Texas offensive line coach now an offensive coordinator at West Virginia. He spent the last two seasons with Strong, mostly under legal clouds because of his contract.

For Texas, the key has been keeping receivers in front of the defensive backs and not getting beat deep, as was the case against California, Oklahoma State and OU. Eureka! Progress.

“We’re not giving up the home runs,” Strong said. “Guys are keeping everything in front of them. We’re making them complete balls.”

D’Onta Foreman’s case for national awards is growing every week, too. On Friday, an ESPN fan poll had Foreman, the nation’s leading rusher, sitting atop the stack.

Foreman can tie Earl Campbell’s school record of 11 consecutive 100-yard rushing games with a triple-digit performance against the Mountaineers. Campbell’s record has stood for 39 years. Foreman averages an FBS-best 180.8 yards per game. West Virginia allows 148.3 yards per game, the 45th-best total in the nation.

West Virginia defensive coordinator Tony Gibson said he doesn’t want to let his safeties get too close to the line of scrimmage. “They’ll throw it over you,” he said.

But if you let Foreman get his shoulders squared and a clean break through the line of scrimmage, “then obviously you’ve seen what he can do,” Gibson said. “He can hurt you.”

Oddsmakers have made Texas a slight favorite at home after being an underdog most of the season. The Longhorns are 4-0 at Royal-Memorial Stadium this year. Las Vegas wasn’t built on winners, but hey, progress.

It’s a crowd that knows good football when it sees it. It’s enthusiastic about progress.

Betting the Horns: West Virginia looks like it’s for real