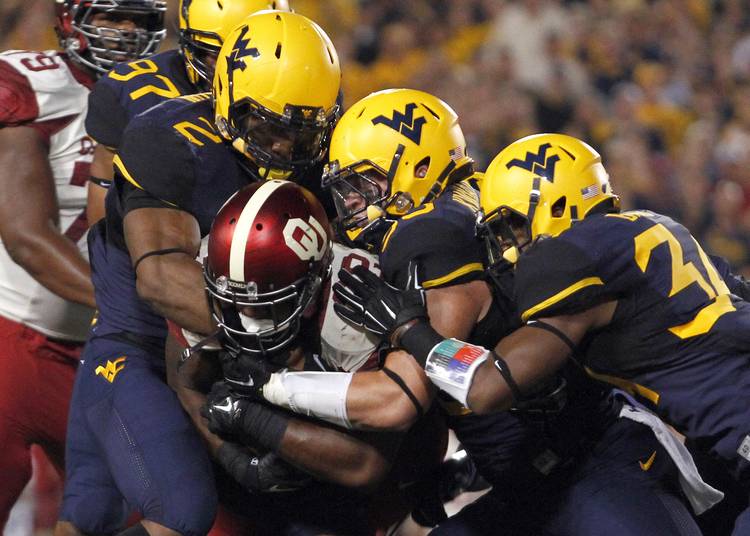 Oklahoma's Samaje Perine is stopped by Brandon Golson and Ishmael Banks of the West Virginia Mountaineers in the first half during the game on September 20, 2014 at Mountaineer Field in Morgantown, West Virginia. (Justin K. Aller/Getty Images)

In its fifth year in the Big 12, West Virginia is chasing its first football championship. The Mountaineers have never been so close, yet they’re still quite a long shot.

West Virginia’s best bet might be this year, when the league’s down by everyone’s standards. Yet computer-based teamrankings.com gives the Mountaineers only a 14.8 percent chance of topping the league.

To pull it off, West Virginia needs to survive its next two games. WVU is a two-point underdog at improving Texas on Saturday and likely will be an underdog again next week at home to Oklahoma. Win those two, and it’s smoother sailing for the Mountaineers for the final two weeks of the regular season, when they will travel to Iowa State and at home to Baylor.

The Mountaineers are equipped to beat the Longhorns because they are the most-balanced team in the Big 12 — fourth in total offense, second in total defense — possess a good quarterback, Skyler Howard, and have the requisite speed needed to deal with Texas.

As terrific as Longhorns back D’Onta Foreman has been — and he’s now projected as a 2017 NFL second-round draft choice by USA Today — he’s been piling up yards against terrible defenses. The Mountaineers, who have a solid D that lacks NFL prospects, aren’t going to stop Foreman, but they should hold him below his 180.8-yard average.

The line is the strength of the WVU offense, and it will be the top unit Texas has seen since playing Oklahoma, if not better than the Sooners’ group.

Big 12 look: Don’t really like anything else in the league this week but, if pressed, try Iowa State (-10) over Kansas. The Cyclones and Jayhawks have the same abysmal records, but that’s where the similarities end.

Extra point: Not a pick but a note that Colorado, the last unbeaten in the country against the spread, finally lost for its bettors last week when the Buffs failed to cover as a 12-point favorite in a 20-10 victory over UCLA. Colorado is now 8-1 vs. the line and 7-2 overall. Temple (9-1 ATS, 7-3 SU) is the new national leader.

Texas opens season with a leaner, wiser Shaq Cleare in the middle

Based on the eye-ball test, Texas is showing progress as Mountaineers arrive