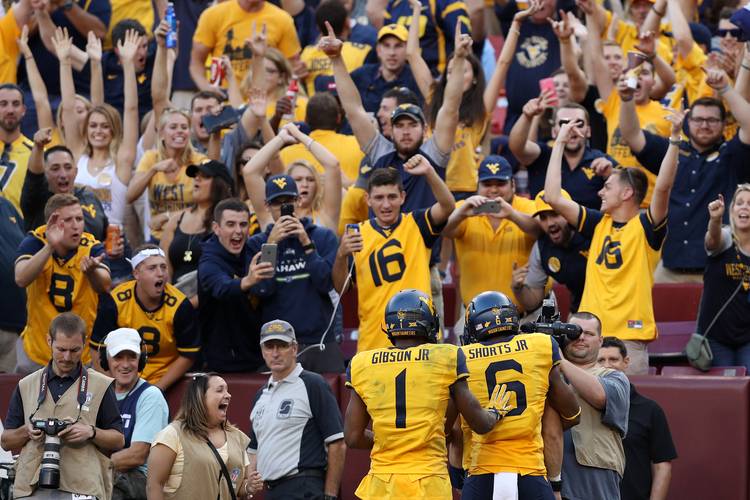 LANDOVER, MD - SEPTEMBER 24: Quarterback Skyler Howard #3 of the West Virginia Mountaineers celebrates a touchdown with teammates against the Brigham Young Cougars during the second half at FedExField on September 24, 2016 in Landover, Maryland. (Photo by Patrick Smith/Getty Images)

Each week of the season, the American-Statesman will interview the beat writer of Texas’ opponent. This week, the Charleston Gazette-Mail’s Mike Casazza offers insight on West Virginia. You can find Mike on Twitter at @mikecasazza.

At No. 11 in the AP poll, is West Virginia underrated, overrated or properly rated?

In most other years, it’s probably too high, but this is a year for an above-average team in a Power 5 conference to improve within the season, surge in the polls and secure a top-10 spot. If nothing else, WVU deserves the spot for that. I’m still not sure the Mountaineers have beaten a team better than them, but that could mean just what it says — they’re better than many other teams.

Has it been tougher to throw or run against the Mountaineers this season?

It’s always tougher to run against WVU. There’s so much man-to-man and Cover 1 and Cover 0 that teams can complete passes. The defensive coordinator’s goal is to stop the run and control the pass, which means putting offenses into predictable passing situations. It’s been helped this season by getting a lead and forcing teams to throw the ball. But the 3-3-5 fits into gaps and uses linebackers and safeties to flow down to the line of scrimmage and handle the run against spread formations. That said, the Texas personnel and the Baylor scheme have given the Mountaineers problems in the past, and that’s a concerning combination Saturday.

How do Justin Crawford, Rushel Shell and Kennedy McKoy complement each other in that backfield?

Shell didn’t play last week and the Mountaineers had no problem running the ball — against Kansas, I know. But rather than mess around with throwing the ball over a crowded box, WVU used goal-line sets all over the field and pushed people around to open huge lanes. So Crawford and McKoy are capable replacements. Shell wears on defenses because he’s so big and physical. Crawford has more twitch than the other two and he has a knack for finding the end zone. McKoy is the most explosive from snap to whistle. It’s been an effective mix, and McKoy’s getting better every game.

What went wrong in that 37-20 loss at Oklahoma State?

Shell got hurt early. Skyler Howard was flustered by the pass rush. WVU was put into an uncomfortable spot for the first time and probably panicked a little. But the Mountaineers were minus-3 in the turnover margin. That’s it. Oklahoma State picked off two passes and recovered a fumble and turned those into 17 points. One interception went through a receiver’s hands. The fumble was a great play by Vincent Taylor, and it happened inside the WVU 15-yard line, so the Cowboys had a short field. WVU missed a field goal, and Oklahoma State scored a touchdown after that, too. The Mountaineers didn’t do a whole lot right, but the Cowboys did hardly anything wrong.

Name one West Virginia player that Texas fans aren’t talking about — but should be.

Darrien Howard. He’s their nose guard, and given WVU’s defensive front, he’s the key. He has to take on double teams and open gaps for the linebackers, but he needs to make some plays, too. He’s a big, nimble player who might finish with two tackles and still be the most valuable player.

Breakfast at Gourdough’s, lunch at Torchy’s, dinner at Ramen Tatsu-ya and libations at Whip in. I can find Rolaids anywhere.