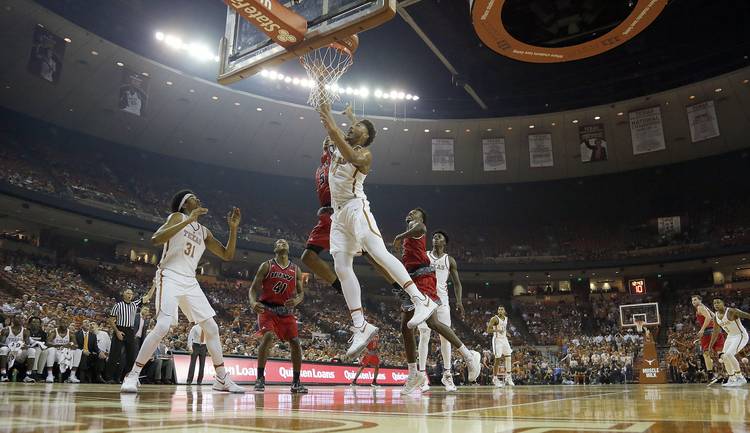 James Banks (4) of the Texas Longhorns battles for rebound with Devin Wyatt (5) of the Incarnate Word Cardinals at the Frank Erwin Center on November 11, 2016 in Austin, Texas. (Photo by Chris Covatta/Getty Images)

You expect first-game jitters from the freshmen. Andrew Jones tried to force some passes into places that weren’t open. James Banks blew a wide-open dunk, too.

But the seniors? Kendal Yancy with a team-high four turnovers, including throwing the ball away on an inbound pass? Shaq Cleare fouling out after just 11 minutes?

Texas coach Shaka Smart had only seven scholarship players plus a walk-on at his disposal Friday in the season opener. But the 21st-ranked Longhorns needed all of them to avoid an embarrassing upset at the Erwin Center.

Incarnate Word, that little, ol’ private school in San Antonio, finally succumbed in the last two minutes as Texas claimed a 78-73 victory. But there was a hint of joy in Cardinals coach Ken Burmeister’s voice when he said, “Again. Everybody tell Shaka to play us again. Thank you.”

Yancy did tally a team-high 19 points, which included two free throws and a critical bucket to give Texas a 70-67 lead with 49 seconds left. Freshman Jarrett Allen (16 points, 12 rebounds) notched a double-double in his first collegiate game, and three others finished in double figures.

But there was an overwhelming sense of relief. Texas (1-0) dodged a red-and-black bullet.

Smart said games like this for a young team is humbling, which is good. “Man, there are so many things we’ve got to get better at and improve on,” Smart said. “Certainly on the defensive end there’s a lot of growth that needs to occur.”

The Longhorns went into the opener knowing they’d be shorthanded. Sophomores Kerwin Roach and Tevin Mack were suspended for an undisclosed violation of team rules. Roach would’ve been the starting point guard, and Mack would likely been one of the first subs off the bench. Both will return Monday against Louisiana Monroe.

Instead, Jones got the starting nod at the point and had a typical up-and-down outing. He tried to thread a touch pass to Allen that got knocked away. But Jones followed that with a layup off a runout and converted the three-point play. Jones had 10 points with three assists and three turnovers.

Other freshmen had impressive moments. Jacob Young made a move on the perimeter that shook his defender clean out of his sneakers and drew ooohs from the crowd. But, Young shot a complete air ball. He did drill five baskets in total and finished with 10 points.

Banks had nine rebounds and five blocks, a record for a UT freshman making his debut. Allen, his “Fro Bros” sidekick, showed off some nifty moves on the low block, not to mention getting on the floor late and keeping the Cardinals from getting a loose ball.

“Every game, I’m trying to shoot for a double-double at least. If I can achieve that, that’s my baseline. That’s what I’m trying to get,” Allen said. “If I don’t have a double-double, I’m fine with it. But if I can do stuff off the ball and help my team win, that’s also success for me.”

Said Burmeister, “Anytime somebody gets a double-double in the first game of their career, it’s pretty impressive.”

Texas’ 18-point lead melted away during the second half, and a building with 10,922 fans went silent when Sam Burmeister drilled a 3-pointer with 2:33 left. The Cardinals suddenly had a 67-66 lead and felt frisky.

“After we took the lead, I think we let it get to our head,” Incarnate Word’s Shawn Johnson said. “We played out of our character.”

But Yancy started an 8-0 run, and the Horns closed it out with some clutch free throws.

There will be much tougher games ahead, starting next week. But for one night, with this young team, it felt good to exhale afterward.

“You want to go out and have a dominating performance and win by a ton of points if you can,” Smart said. “But the bottom line is our guys came back after we relinquished a double-digit lead.”

The Eyes of Texas: Three Mountaineers the Horns will be watching