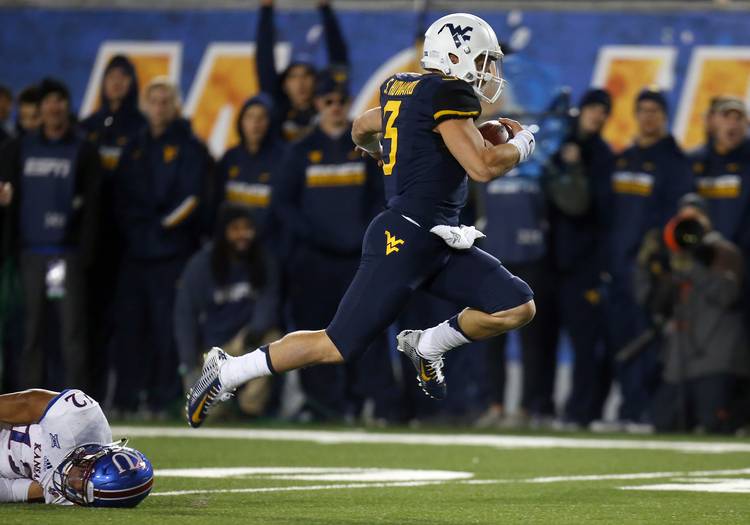 Skyler Howard (3) of the West Virginia Mountaineers rushes for a 33-yard touchdown in the first half against the Kansas Jayhawks during the game on November 5, 2016 at Mountaineer Field in Morgantown, West Virginia. (Photo by Justin K. Aller/Getty Images)

Foreman can tie the school record with an 11th consecutive 100-yard rushing performance. He’d be tying Earl Campbell’s mark that has stood for 39 years. Foreman, a 250-pound mix of power and grace, will have to earn it Saturday. West Virginia’s run defense is allowing only 143.8 yards per game this season, the fourth-best total in the Big 12. During this 10-game streak, Foreman has rushed for 1,750 yards on 236 attempts, an average of 7.4 yards per carry.

This is the last game of a three-game stretch that was supposed to annihilate the Texas secondary. Baylor and Texas Tech, with their high-flying offenses, were thought to just be able to walk all over Dylan Haines, Jason Hall and their merry band of cornerbacks. Instead, the UT secondary tightened the bolts and held both the Bears and Red Raiders to about 10 points below their season averages. Howard completes 65 percent of his passes with 16 touchdowns. But he’s facing a unit brimming with confidence.

Just like the Longhorns, the Mountaineers have mixed and matched players in the secondary in hopes of finding the right combination. Four different players have started at the left corner position. Fleming has started at both the left and right cornerback position this season. Johnson might be on the cusp of a breakout. He had two touchdown catches last week against Texas Tech running the same route in different directions. It’s a crowded field, though. He’s tied for fifth on the team in receptions at the moment.

Let’s be clear: Texas should not abandon its 18-Wheeler short-yardage package. Backup quarterback Tyrone Swoopes can still be effective, as one would expect a 250-pound runner should be. But it took nine games before Gilbert would show any new wrinkles — a pop pass against Texas Tech that was nullified by penalty. Think of all the players Gilbert has at his disposal: Jerrod Heard, Devin Duvernay, etc. Oh, and Foreman, who’s only the nation’s leading rusher. There’s bound to be something that can get the 18-Wheeler rolling again.

Leading up to his return to Royal-Memorial Stadium, Joe Wickline insists that he harbors no ill will toward Texas coach Charlie Strong, who dismissed him last season. “I don’t hold grudges or hate or judging. I don’t have time for that,” Wickline told the Statesman earlier this week. Yeah, right. The former assistant once goaded into staying on the field for “The Eyes of Texas” probably shared everything he knew about Texas’ weaknesses. Strong and his staff better be ready for anything.

Q&A with a West Virginia beat writer: ‘Neers are tough against the run