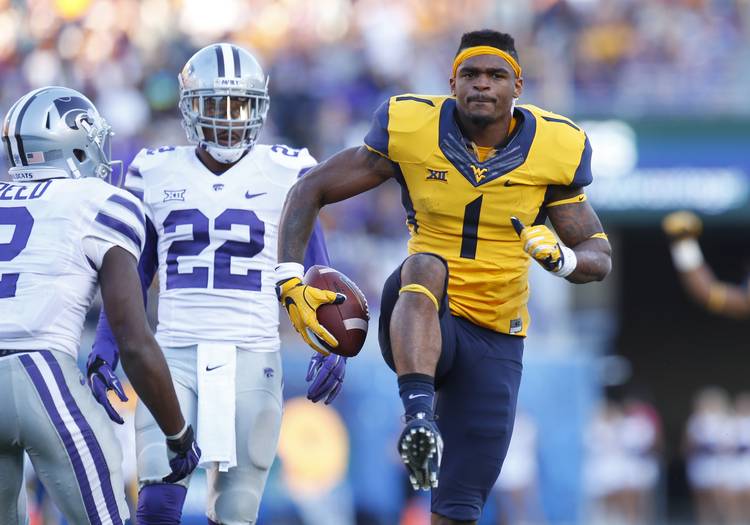 MORGANTOWN, WV - OCTOBER 01: Shelton Gibson #1 of the West Virginia Mountaineers reacts after making a catch while having his helmet ripped off by DJ Reed #2 of the Kansas State Wildcats in the second half during the game on October 1, 2016 at Mountaineer Field in Morgantown, West Virginia. (Photo by Justin K. Aller/Getty Images)

A senior, Howard has thrown for 2,293 yards and 16 touchdowns this season. Having also completed 175 of his 269 passes (with only six interceptions), he ranks fourth in the Big 12 with a passing efficiency of 151.8. Howard was certainly efficient in last year’s 38-20 win over Texas, completing 10 of 12 passes for 122 yards and two touchdowns. He also ran for a 2-yard score.

Douglas spent the first three years of his college career at Nassau Community College in New York, but he has notched six interceptions over his two seasons in Morgantown. Five of Douglas’ interceptions have come this season, and the Big 12’s leader in that category is halfway to Aaron Beasley’s 1994 single-season school mark. Douglas also has 41 tackles.

Gibson trails teammate Daikiel Shorts, Jr., for the team lead in receptions (Shorts has 46, Gibson 31) and receiving yards (678 to 636), but he has a team-high six touchdown catches. Gibson also averages 24.6 yards per kickoff return. And only Oklahoma’s Joe Mixon and Dede Westbrook and Texas’ D’Onta Foreman are producing more all-purpose yards in the conference than Gibson’s 137.9 yards per game.

Staff takes: Texas has confidence and momentum again, but will it last this time?