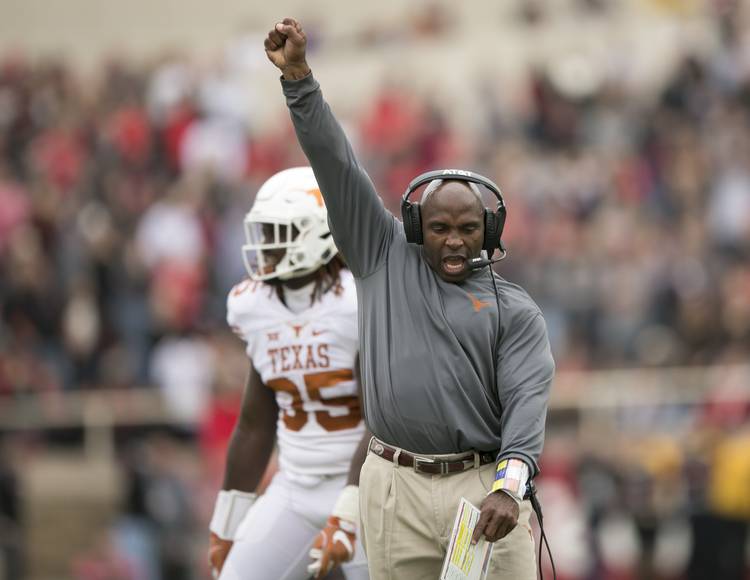 Every time fans think Texas has turned the corner under Charlie Strong, they get absolutely crushed. A huge win over No. 10 Oklahoma last season was followed by a ghastly loss at Iowa State. A huge win over No. 10 Notre Dame this season was followed by frustrating disasters at Cal and Oklahoma State. Something feels different about these last two weeks, though. Those wins over Baylor and Texas Tech were impressive, even in this bad league. If Strong can put another win behind those two, this team will be feeling good heading down the stretch. Suddenly, an 8-4 finish looks extremely realistic.

Royal-Memorial Stadium has been a house of horrors for nationally ranked teams this season, as then-No. 10 Notre Dame and then-No. 8 Baylor were dealt devastating defeats. It’s tough to compare West Virginia, now No. 11 in the Associated Press poll, to the aforementioned schools, but Texas’ recipe for success will need to remain the same: Keep feeding the ball to No. 33 (381 yards, three TDs against the Irish and Bears) and bend but don’t break on defense (Texas held those teams to field goals at critical points in 50-47 and 35-34 wins). What I just told you isn’t rocket science, but we’ll see if Texas can once again get the job done.

For the first time in Charlie Strong’s three seasons at Texas, I sense real momentum and a clear buzz about this football team, even if most of those positive vibes are internal rather than external. Here’s a great opportunity for the Longhorns to show they are for real and have turned the corner with a very balanced offense and a play-making defense that’s finally playing with confidence. I’ll be very surprised if Texas doesn’t play with a lot of swagger and heart. I’m looking for a Texas win to make the team bowl-eligible, and no one mentioned that this week, which I rate as progress because the players have higher goals.

Texas’ improvement on defense has come partly because Charlie Strong has placed more on the shoulders of cornerback P.J. Locke. The sophomore’s unflappable confidence has started to spread throughout this defense. Locke’s increased workload has coincided with the Horns cutting down on those brutal long pass plays that have plagued them for most of the season. Locke loves his nickel role. Better yet, he’s a cerebral sort who doesn’t mind taking on a leadership role in the secondary. I can see him making a couple of really big plays Saturday. Look for him not only in pass coverage but also in blitz packages.

The Eyes of Texas: Three Mountaineers the Horns will be watching