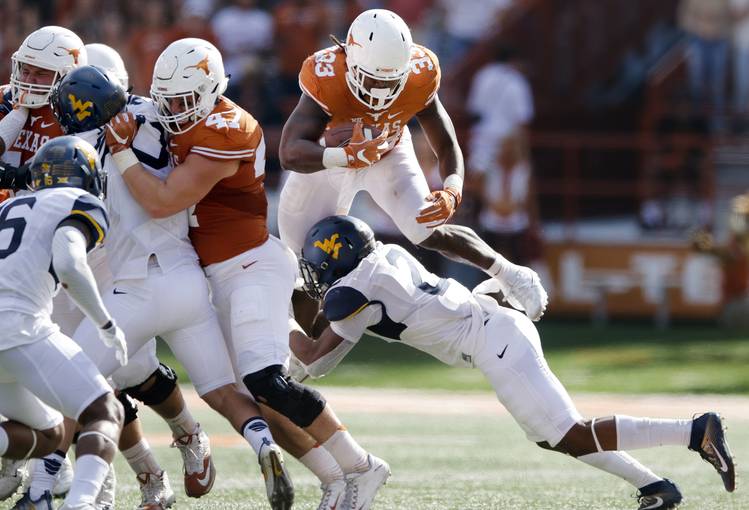 Only Kansas stands between D’Onta Foreman and Texas history.

Foreman was congratulated by Campbell as he exited the field at halftime.

“He told me that he hopes that I go break it next week,” Foreman said. “He also said that if somebody breaks my record or whatever, just come back and tell them congratulations. I told him I definitely would.”

Foreman crossed the 100-yard threshold on a 5-yard run in the second quarter. On that same 21-play possession, he also was given the ball twice on fourth-down attempts. He ran for three yards on a 4th-and-1, and he got three more yards on a 4th-and-2.

But Texas, with no timeouts, opted for a field goal on a 4th-and-1 from the West Virginia 2 with nine seconds remaining in the first half. Later in the game, Texas had a 37-yard field goal try blocked after deciding not to go for it on fourth-and-2.

“I definitely would have liked to go for it,” Foreman said. “But I’m a team player; whatever coach Strong and the coaching staff wants to do, then I’m fine with that. Even with those two possessions, I still feel like we our chance to win the game.”

Foreman will next face a Kansas team that entered the week with the Big 12’s second-worst run defense. (The Jayhawks allowed 238 rushing yards in a loss to Iowa State on Saturday.) A 100-yard effort in Lawrence would not only give Foreman the school record, but it would catapult him into fifth place on the school’s single-season rushing list. At 1,613 yards, he currently sits in sixth place — six yards away from Jamaal Charles.

Referees called for a video review. On the Godzillatron, a replay was shown that indicated West Virginia had 12 players on the field for the final play. Had that been true, Texas would have been given an un-timed down at the Mountaineers’ 22.

West Virginia, however, was not penalized. The stadium video monitor was replaying the Fox Sports 1 broadcast, which had incorrectly counted the amount of Mountaineers on the field. The FS1 team skipped from four to six while counting the West Virginia defenders.

Odds and ends: Texas linebacker Malik Jefferson left the game in the first half with a head injury, and did not return. … Junior Dorian Leonard and freshman Collin Johnson both recorded seven receptions, and Leonard logged a career-high 125 yards. Johnson scored for the second straight week, but he also was stopped a yard short on a fourth-down attempt in the final quarter. … An announced crowd of 96,367 was Texas’ fourth-biggest crowd of the season. The Longhorns are 4-1 at home this season. … Representatives from the Sugar Bowl and Russell Athletic Bowl were at the game.

No more jitters now, No. 21 Texas moves on to Louisiana-Monroe