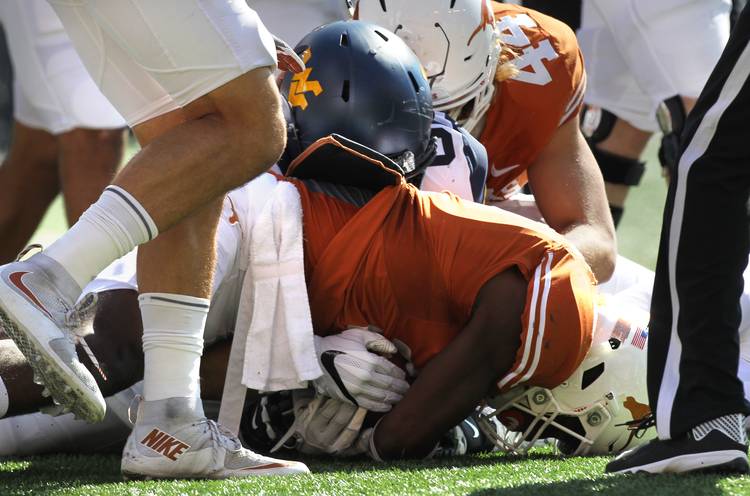 1. WHAT DID D’ONTA FOREMAN DO FOR AN ENCORE?

Foreman rushed for 167 yards, his third-best performance of the season against one of the Big 12’s toughest run defenses. It was his 11th straight 100-yard game dating back to last season, a streak that tied Earl Campbell’s run of 11 straight 100-yard games from his 1977 Heisman Trophy season. Foreman, coming off a 32-carry, 250-yard game against Baylor and a 33-carry, 341-yard day against Texas Tech, found the yards harder to come by against the Mountaineers, but still had runs of 32 and 21 yards. He now has 1,613 yards on the season.

We’re talking containing Howard as a runner (nine carries for 27 yards), not a passer (21-35-269 with one touchdown and three interceptions). He was WVU’s leader in rushing touchdowns with six heading into the game, and the Longhorns have had their issues containing quarterbacks’ ground efforts this season (Baylor’s Seth Russell rushed for 138 yards and Kansas State’s Jesse Ertz ran for two touchdowns). Howard, though, was contained, including on his most important carry of the day — a four-yard gain on third-and-5 with six minutes left. The Mountaineers, nursing their 24-20 lead, had to punt.

3. WHO FARED BETTER: THE JUNIOR OR FRESHMEN RECEIVERS?

Freshman quarterback Shane Buechele has plenty of targets in a receiving corps that featured eight players with double-digit catches heading into Saturday. The leaders in catches, though, were juniors Armanti Foreman (33) and Jake Oliver (23). But Texas’ freshmen can’t be overlooked. Devin Duvernay’s 80- and 75-yard touchdown catches are Texas’ longest plays this season, and Collin Johnson’s had two toe-tapping touchdowns in last week’s win over Texas Tech. On Saturday, though, three of Texas’ top four pass catchers were juniors, led by Dorian Leonard’s seven grabs for 125 yards.

4. WITH ANTHONY WHEELER BACK, DID THE DEFENSE KEEP IMPROVING?

Granted, West Virginia isn’t Baylor or Texas Tech when you’re talking offenses, but the Longhorns have shown steady improvement and have passed the on-field eye-ball test since Charlie Strong took over play-calling duties from Vance Bedford. Texas held WVU to 383 yards, forced four turnovers and kept the game close in the second half, giving the offense chances to pull out the win. Wheeler, Texas’ leading tackler, missed the Texas Tech game while attending his grandfather’s funeral. He was back, but had a quiet day with three tackles. It was Edwin Freeman (a team-high eight tackles), Kris Boyd (seven stops, one forced fumble and recovery) and Malcolm Roach (seven tackles, one sack, three tackles for loss) who led the way on Saturday. The defense had to play most of the game without Malik Jefferson, who exited the game in the first quarter with a concussion.

Staff takes: Texas has confidence and momentum again, but will it last this time?