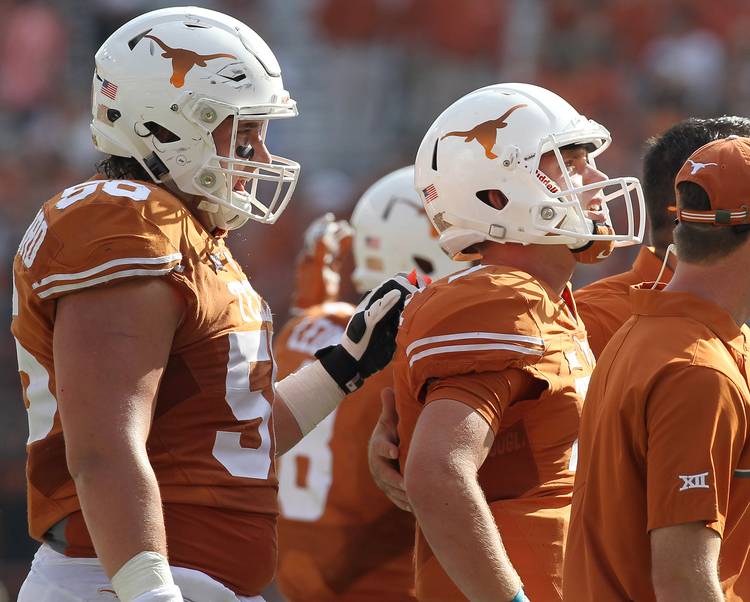 Texas offensive lineman Brandon Hodges(58) exits the field with quarterback Shane Buechele, center, after he was sacked in the third quarter at Royal-Memorial Stadium, Saturday, Nov. 12, 2016. (Stephen Spillman / for American-Statesman)

WHY TEXAS (5-5, 3-4) LOST: There were plenty of reasons — the Longhorns were largely unable to capitalize on four West Virginia turnovers, Shane Buechele was sacked four times, Texas committed three turnovers (including two in the second half), two field goal opportunities (one by a block, another by a post-replay fumble) were taken away, and the Mountaineers converted 8 of 15 third-down chances — but in the end, it’s as simple as the fact that West Virginia is, and was, about a field goal better than Texas. It was another spirited effort on defense, the offense produced a 300-yard passer, a 100-yard rusher and a 100-yard receiver, and the crowd and energy were there.

WHY WEST VIRGINIA (8-1, 5-1) WON: The Mountaineers’ defense is legit — Kyzir White planted Shane Buechele on a key third-down sack and fumble that robbed Texas the chance of kicking a field goal to make it a 24-23 game, West Virginia forced two fumbles and an interception and Rasul Douglas, the Big 12’s interceptions leader, made plays throughout. Skyler Howard was picked off three times, but was efficient enough on third downs to get it done. The running game averaged only 3 yards a carry, but Kennedy McKoy managed two scores. The Mountaineers, who were picked near the bottom in the preseason Big 12 poll, are hardly fool’s gold.

THE EYES OF TEXAS: … were on three specific Mountaineers — Howard, who ranks fourth in the Big 12 in passing efficiency; Douglas, the Big 12’s interceptions leader; and wide receiver Shelton Gibson, who’s leading the team in touchdown catches and also is a dangerous kick returner, trailing only Oklahoma’s Joe Mixon and Dede Westbrook and D’Onta Foreman in all-purpose yards in the Big 12.

Douglas had nine tackles, one pass breakup and added his seventh pick of the season.

Gibson had four catches for 65 yards and had a 20-yard kick return.

Offense: D’Onta Foreman. Another solid effort from Texas’ MVP. In his last three games, Foreman has 100 carries for 760 yards and five touchdowns.

(1) The defense continues to play better under Charlie Strong than Vance Bedford. The Horns have now held five straight teams under their season scoring average and have 21 sacks and 45 tackles for loss in the same span.

TEXCETERA: Two streaks ended Saturday — Texas had won four straight against top-12 teams ranked in the AP poll (West Virgina is No. 11 this week) and was undefeated at home. … Attendance was announced at 98,367. … The loss drops Texas to 2-4 all-time vs. the Mountaineers; they’ve split their four games as Big 12 programs. … Texas set a school record with 536 yards of offense, its seventh time this season it’s gone over the 500-yard mark.

ON DECK: AT KANSAS (Nov. 19, time/TV TBA). This game will kick off either at 11 a.m. or 2:30 p.m. Either way, Texas’ pursuit of a sixth win and accompanying bowl-eligibility and Foreman’s pursuit to break Campbell’s record will likely be the dominant story lines. The Jayhawks are about as close to an automatic W as you can get in the Big 12, so you’ve got to like the Longhorns’ chances of winning a second straight road game, lining themselves up for a bowl invitation and helping their star running back add to what is already an outstanding season all in one game.

His Trump tweets behind him, Dylan Haines makes headlines with two interceptions