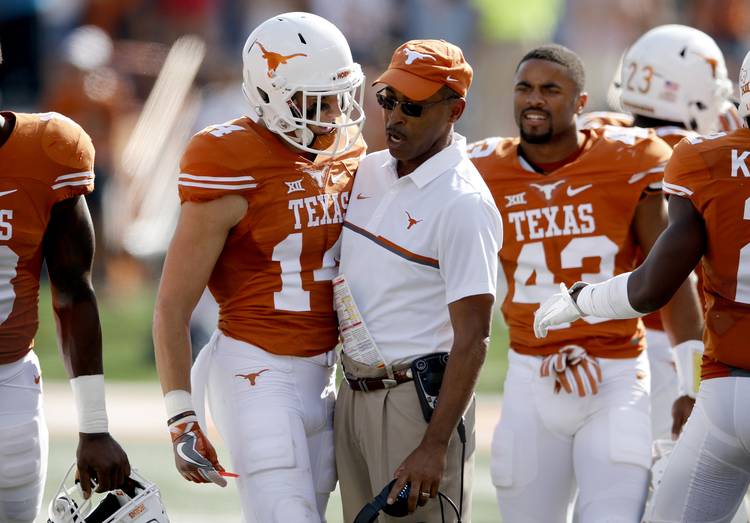 The senior’s two interceptions — his third and fourth of the season, and 12th and 13th as a Longhorn — moved the former walk-on into a fifth-place tie in the Texas career record book, but the Longhorns still came out on the losing end of a 24-20 decision to West Virginia. Haines has half of Texas’ interceptions this season, though he’s yet to pick off a pass in a win.

Texas, which dropped to 5-5, has games against Kansas and TCU left on the regular-season schedule.

“What I want the most out of these last two games — three, if we make a bowl — is to go out on a winning record,” Haines said. “That obviously means the most to me. Playing high school football and pee-wee or whatever, you were always on that winning team. That’s the best feeling, regardless of your personal accolade.”

Haines logged both of his interceptions in a third quarter that also saw P.J. Locke III pick a pass off from West Virginia quarterback Skyler Howard.

Playing center field in a Cover 2 scheme, Haines tracked down Howard’s third-down heave into the end zone for his first interception. On West Virginia’s next series, Haines said he eyed teammate Edwin Freeman chasing a Mountaineer and was able to read an overthrown pass near midfield.

“You need to make those plays, especially on third down to get us off the field,” Texas coach Charlie Strong said. “I was happy to see him (get those) two interceptions.”

Haines did not return either of his interceptions on Saturday, so he still remains 23 yards shy of Carter’s school record of 261 career return yards.

“He definitely gave us a boost,” defensive back John Bonney said. “Whenever you make plays like that, especially with them getting close to the end zone … that’s always a big boost. We look to him for leadership and he came through clutch today, and played a real good game.”

With the two-turnover performance, Haines closed out a week in which he stepped into the spotlight for comments he made after the presidential election.

Following Donald Trump’s triumph, Haines tweeted that those using the “#NotMyPresident” hashtag were free to leave the country. He also used a blank sheet of paper to illustrate what he viewed the country owes its residents. Haines, who appeared to support Trump in other posts, later issued a clarification about his message and the tweet has since been deleted.

Haines twice told reporters after the game that while he enjoys discussing politics, he didn’t want to on Saturday. He said he didn’t feel like he was playing with any additional pressure.

Third and Longhorns: Inside Texas-West Virginia