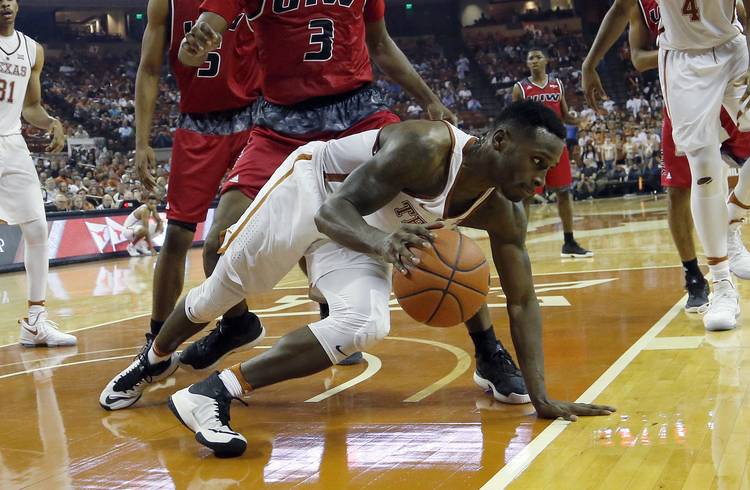 Kendal Yancy (5) of the Texas Longhorns moves with the ball against the Incarnate Word Cardinals at the Frank Erwin Center on November 11, 2016 in Austin, Texas. (Photo by Chris Covatta/Getty Images)

After weeks of practicing against themselves, Texas players probably enjoyed facing someone in a different colored jersey.

The young Longhorns probably didn’t relish their first glimpse over the edge of a cliff, though.

Incarnate Word nearly pulled off the unthinkable Friday night. Now, No. 21 Texas will see a step up in competition on Monday against Louisiana-Monroe at the Erwin Center.

“You have to live with growing pains with young guys,” coach Shaka Smart said. “It’s not going to be just freshmen, but returning guys. The key is that we get better. The real key is (Saturday) in practice. Do the guys walk in with a sense of urgency and want to improve?”

The Horns (1-0) will be close to full strength as sophomores Kerwin Roach and Tevin Mack return from a one-game suspension. Still, a team with seven underclassmen in the rotation had two days to refocus and realize what all those seniors last year already knew. This isn’t easy.

“It’s a totally different ballgame,” freshman James Banks said. “(Incarnate Word) came in and showed up. We’re going to have to bring it every night. The guys are stronger, faster, everyone has more experience.”

It’s imperative Texas gets consistent play from its veterans, like seniors Kendal Yancy and Shaq Cleare. Yancy had a team-high 19 points against the Cardinals, but also made some uncharacteristic mistakes and had a team-high four turnovers. Cleare fouled out in just 11 minutes.

“Regardless who we play, you’ve just got to bring it and stay locked in and just limit the mistakes,” Yancy said.

Monday’s game is the first of the Legends Classic tournament. Texas will host Eastern Washington on Thursday and then advance to Brooklyn for games against Northwestern (Nov. 21) and Notre Dame or Colorado (Nov. 22).