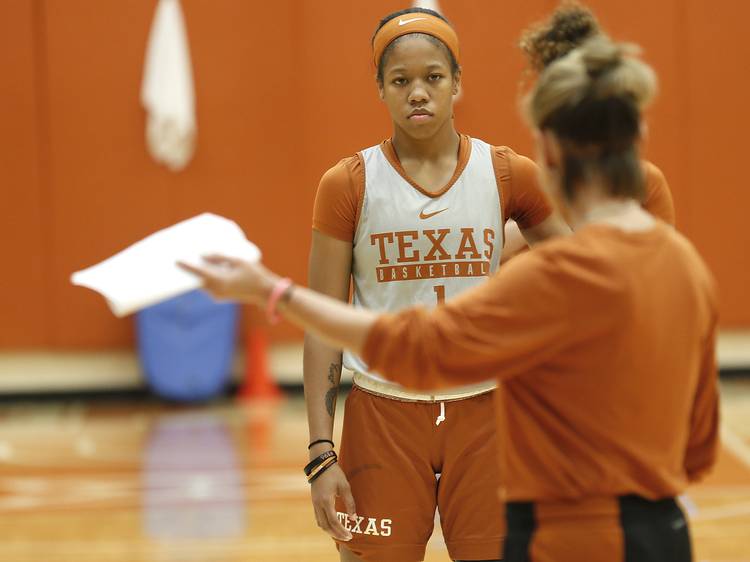 Friends and fans consistently remind Karen Aston that the 2017 Final Four for women’s basketball will be played in Dallas.

“No pressure there!” the fifth-year Texas coach told a group of media reps.

Instead of shielding her players from optimistic followers of Longhorns basketball, Aston welcomes the commentary. Texas has not been a major player during the UConn/Tennessee/Baylor era of women’s hoops. But the Longhorns have been knocking on the door of national respect the past two years — including an Elite Eight appearance last March — giving UT reason to believe something good is about to happen.

“We’re now being talked about as a contender, and that’s a place you want to be,” Aston said.

With Dallas in mind, the Longhorns have created a hashtag — #194 — for their journey through the 2016-17 season. That’s the mileage from the Frank Erwin Center to the American Airlines Center in Dallas.

The first step begins Monday when the eighth-ranked Longhorns travel to No. 11 Stanford.

Texas is armed with two of the best players in the Big 12 — junior guards Brooke McCarty and Ariel Atkins. Both have been tagged as team leaders with the departures of Imani Boyette and Brady Sanders.

While McCarty and Atkins undoubtedly will play major roles, the Longhorns will receive a big lift from its youth brigade.

Holmes, ranked by ESPN as the No. 1 high school basketball recruit in the country last year, made a big first impression, scoring 11 points in last Sunday’s 93-43 exhibition victory over Tarleton State.

Aston describes the 6-3 forward as “LeBron-ish” for her strong physique and freakish athletic ability.

Holmes is named after Olympic icon Jackie Joyner-Kersee. And like the heptathlete, Holmes doubles as a track and field phenom. Despite her decision not to run track during her senior year at Cedar Hill, Holmes will compete in the long jump and triple jump at Texas.

Holmes is expected to use her leaping ability to help with rebounding. Although she will roam the perimeter to look for her shot, she also will help center Kelsey Lang and twin sister forwards Khaléann and Audrey-Ann Caron-Goudreau in the paint.

“In high school I was known to get a lot of rebounds because everyone was shorter than me,” Holmes said. “Here, you have to actually position yourself in order to get rebounds, which has been a hard step so far.”

With Holmes and fellow freshman Alecia “Sug” Sutton on board, Texas had the No. 3 recruiting class in the country, according to ESPN. The two McDonald’s All-Americans will compete for starting positions as freshmen.

Sutton, a point guard, was recently cleared to resume workouts after tearing her anterior cruciate ligament during her senior year at Parkway North High in St. Louis.

“I’ve been through a lot emotionally,” Sutton said. “Mentally, when it first happened (last December), it hurt me because all I knew was basketball, and suddenly it was taken away from me.”

The Longhorns have one of the toughest schedules in recent memory. Stanford will be the first of 11 games Texas plays from the Associated Press preseason Top 25 poll. The Horns will play two games apiece against No. 2 Baylor, No. 16 Oklahoma an No. 22 West Virginia. Rounding out the list are games against No. 3 UConn, No. 4 South Carolina, No. 10 Mississippi State and No. 13 Tennessee.

For Texas to have any chance to play in Dallas come March, games against the best teams will benefit the Horns, Aston said.

“They see how high the bar is set,” she said. “When you play UConn, you learn really quickly what your weaknesses are. When you’re trying to win a national championship, that’s what you’re looking at.”

Decision is looming for Texas president about Charlie Strong