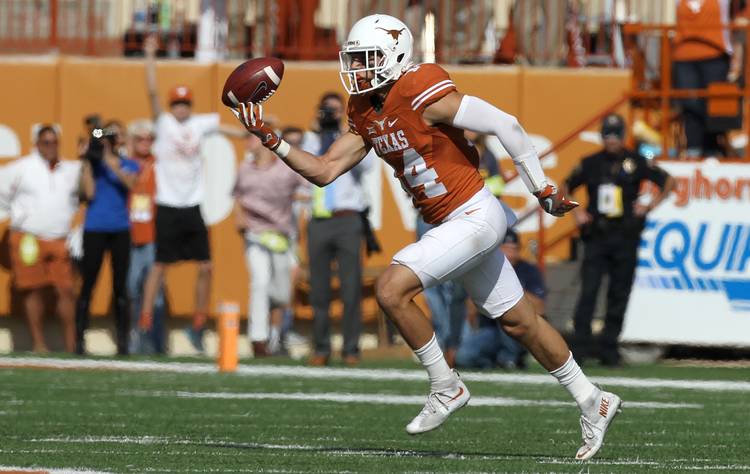 There were 173 snaps taken in Texas’ 24-20 loss to No. 11 West Virginia on Saturday. Here are five that ended up making a big difference:

Trailing 17-10, Texas got the football at its 14 with 6:55 left in the first half. West Virginia didn’t run another play before halftime, thanks to the Longhorns’ 21-play possession. On the drive, running back D’Onta Foreman eclipsed the 100-yard mark for the 11th straight game, and he also converted two fourth-down attempts.

The Longhorns faced a third fourth down on the drive, but opted to keep their Heisman hopeful on the sideline.

Texas played it safe with nine seconds remaining, and Trent Domingue kicked a 19-yard field goal on a 4th-and-1 from the West Virginia 2. Foreman pleaded with head coach Charlie Strong to keep the offense on the field. The Longhorns, though, had no timeouts left, so the team would have been in a precarious position had it not gotten the first down or not reached the end zone.

“I just didn’t want to take points away from us,” Strong said. “If you don’t get it, then you’re second-guessing yourself.”

Texas faced another fourth-and-short on its next possession — its first of the second half — but the Longhorns paid for its risk-averse decision this time.

Domingue was called upon for a 37-yard kick on a 4th-and-2 at the West Virginia 20. Mountaineers safety Marvin Gross Jr., though, was credited with the block, and West Virginia maintained its 17-13 lead.

It was the fifth Texas kick blocked this season. Notre Dame forced overtime by scoring off a blocked extra-point attempt, and Oklahoma State blocked three kicks during last month’s loss in Stillwater.

West Virginia took over at its 21 following the blocked kick, and the Mountaineers put together a 15-play, 79-yard touchdown drive. Kennedy McKoy capped it with a 3-yard scoring run, giving West Virginia a 24-13 lead.

The Mountaineers converted two 3rd-and-5 attempts, including a 3rd-and-9. On that play, West Virginia receiver Shelton Gibson — who had been sidelined earlier in the game after a hard hit by Jason Hall — beat Kris Boyd for a 23-yard catch to the Texas 3.

West Virginia was held scoreless over its final five possessions — the Mountaineers picked up 42 yards and two first downs — as the Texas defense prevented its guest from landing a knockout punch.

Leading the way for the Longhorns was senior safety Dylan Haines, who intercepted a pass in the end zone before snagging another Skyler Howard pass near midfield. Haines’ third-quarter interceptions pushed his career total to 13, which moves the former walk-on from Lago Vista into a fifth-place tie in the Texas record books.

Texas actually had three interceptions in the third quarter as sophomore P.J. Locke III also registered a pick. Texas turned those turnovers into a touchdown, a blocked field goal and a lost fumble at the West Virginia 20.

Texas pulled within four points when Collin Johnson scored on a 20-yard catch in the third quarter. Johnson was unable to replicate that highlight in the final frame.

Facing a 4th-and-5 with 2 1/2 minutes left in the game, Shane Buechele connected with Johnson. The freshman receiver, though, only ran four yards on the route, and was immediately run out of bounds by West Virginia’s Rasul Douglas. A replay upheld the spot of the football, and West Virginia took over at its 39.

“It was just short of the sticks,” Johnson said. “I’ve got to get that first down.”

The Texas defense made another stop, and the Longhorns drove to the West Virginia 27 in the waning seconds. Neither Johnson nor Jake Oliver could come down with a last-ditch heave into the end zone as time expired, and Texas slumped to 5-5 on the year.

No more jitters now, No. 21 Texas moves on to Louisiana-Monroe