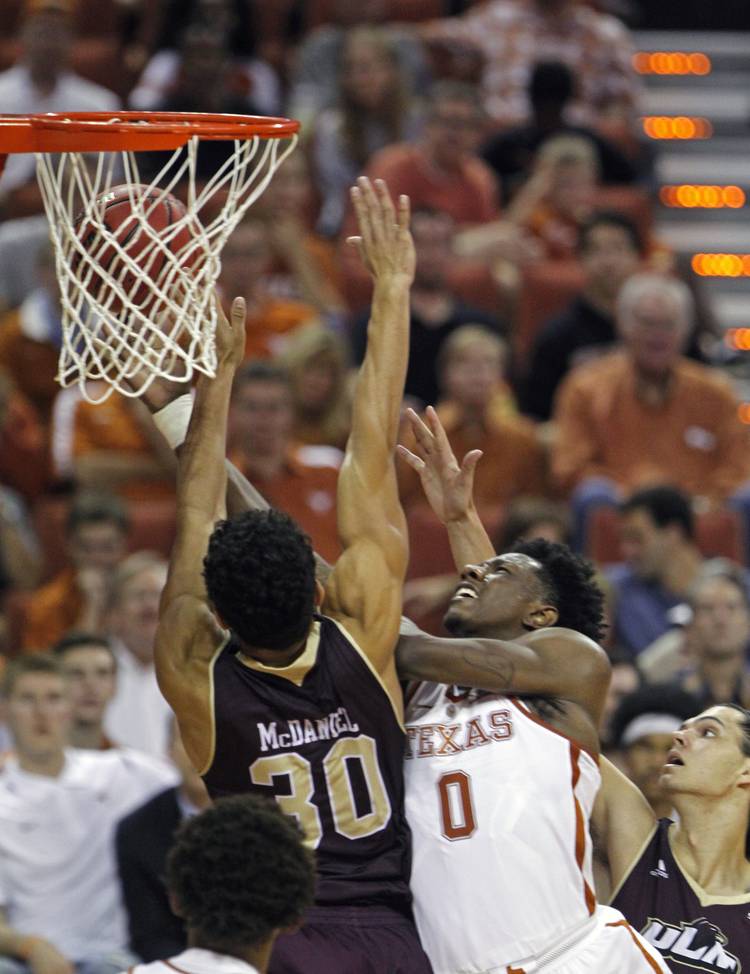 When Tevin Mack first arrived at Texas, he was a strength coach’s nightmare.

This 6-foot-7 athletic freak from South Carolina couldn’t do a single pull-up. He was listed at 210 pounds as a freshman, but that might’ve been generous.

So Mack got serious about lifting weights, getting in real shape and started doing pull-ups. If he can put up with strength coach Daniel Roose’s country music in the weight room, Mack can probably handle just about anything now.

“I just realized last year that I used to get beat around a little bit in the paint a little bit by bigger guys,” said Mack, who gained 15 pounds and now weighs 220. “I got tired of that, quite frankly.”

On Monday, Mack drove the lane and scored on a tough runner, drew a foul and flexed his now-bulging biceps. These days, Mack can do 15 pull-ups, one more than his point total in an 80-59 win over Louisiana-Monroe at the Erwin Center.

Mack is the same, smooth long-range shooter Texas fans saw last season. He went 4 for 6 from 3-point range and hit two from downtown in a 22-3 surge that put away the Warhawks (1-1).

For Mack and fellow sophomore Kerwin Roach Jr., the win over ULM was their season opener of sorts. Both were suspended in last Friday’s win over Incarnate Word for an undisclosed violation of team rules that happened months ago.

Roach had 11 points and went 4 for 7 shooting in 22 minutes. But he was happy to see Mack have a big night. The 23rd-ranked Longhorns (2-0) are going to need a long-armed swingman who can score on the perimeter and flash inside.

“It’s a great feeling, like seeing your brother go off in a good game,” Roach said. “Him having that performance and just catching fire, catching that rhythm in the first game, that’s good to see.”

Smart said Mack’s role is the same as everyone else — “be an energy giver.” Mack, Roach and sophomore Eric Davis Jr. are going to play extended minutes all season long. Texas needs all three, along with seniors Kendal Yancy and Shaq Cleare, to mentor and guide four freshmen through the season’s ups and downs.

“Energy is something that is key for him,” Smart said of Mack. “He’s got great length. He can be a great defender if he sets his mind to it. The best thing he does is score, and so we want him to be really aggressive shooting the ball and scoring.”

There was more energy all the way around from the opening tip against ULM. Texas looked more polished from tip to horn, frankly. Four players finished in double figures, and the Horns had just five turnovers the entire night.

Freshman Jarrett Allen said last Friday his baseline should be a double-double. Well, he didn’t quite get there this time, getting just eight points and three boards. But his post move off the block for a one-handed flush was a sight to behold.

Fellow freshman James Banks, a bundle of raw athleticism, had six rebounds. Cleare rebounded from a bad debut to have eight points and six rebounds in 22 minutes. Davis had a career-high seven rebounds.

“That’s a team that’s got a lot of potential,” ULM coach Keith Richard said. “Their ceiling is pretty high.”

The Texas guards were chasing their tails at times as the Warhawks whipped the ball around the perimeter. ULM can get hot at any moment, but not Monday night. Marvin Jean-Pierre was the only ULM player in double figures with 13 points. Overall, the Warhawks were 8 for 34 from 3-point range and shot 30.4 percent overall.

Isom progressing: Graduate transfer Mareik Isom, who is sidelined by an ankle infection, had stitches removed on Monday. He’s expected to get a picc line, a small catheter used to deliver treatment, removed on Tuesday.

“That will be a really big step for him,” Smart said. “He’s been having to wake up early in the morning, get the treatment and then two other times during the day. So once he gets that out, it’s just a matter of how fast his ankle can recover.”

Smart said he’s hopeful Isom can be cleared in the next few weeks.

With school records in hand, Michael Dickson is angling for Ray Guy Award

Is Texas good enough for D’Onta Foreman to win the Heisman Trophy?