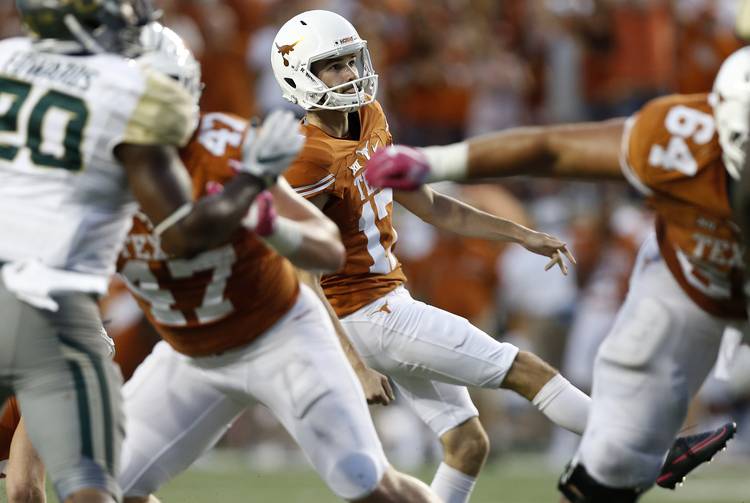 Texas coach Charlie Strong told media members on Monday that he has no plans to bench Domingue. The graduate transfer from LSU had a field goal blocked in last week’s 24-20 loss to West Virginia. Strong said Domingue kicked the ball low against the Mountaineers, but the misfire won’t cost him his job.

Freshman Jon Coppens is the only other kicker on Texas’ roster. Punters Mitchell Becker and Matthew Sims also kicked in high school.

“We’re not going to open it up,” Strong said. “The thing about Trent is he can hit those kicks.”

Domingue has hit 14 field goals, which ranks second in the Big 12. Domingue has made two field goals in six of Texas’ games, and he converted a 39-yard kick in the final minute of a 35-34 over Baylor on Oct. 29.

One of Domingue’s five misses, though, was a 35-yard failure in a 24-21 loss to Kansas State. Opponents have also blocked four of his extra points.

“We all trust in him, he has great belief in himself,” Dickson said. “It’s just something we work on at practice. Not everyone is perfect, and we all basically motivate each other to work hard.”

Decision is looming for Texas president about Charlie Strong