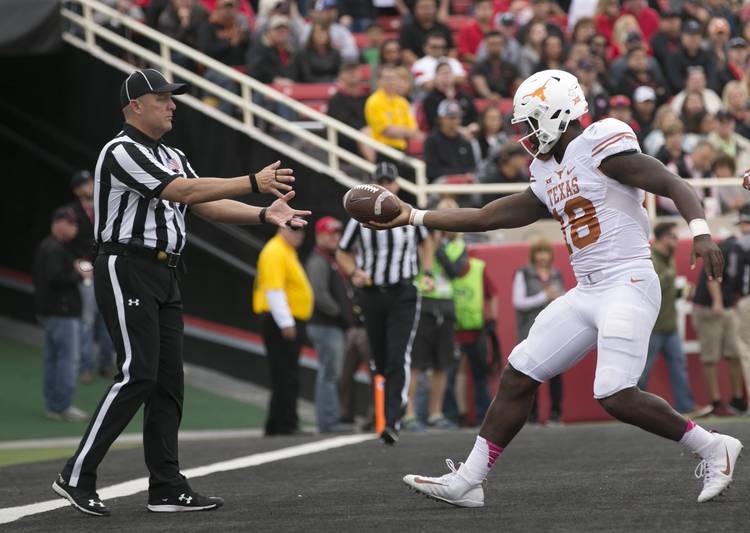 Texas has not permanently parked its 18-Wheeler.

Fifty-seven Longhorns appeared in the participation report for Texas’ 24-20 loss to West Virginia this past Saturday, and senior quarterback Tyrone Swoopes was not one of them. Swoopes is freshman Shane Buechele’s back-up, but he has still been used as a short-yardage rushing option.

Yet, Texas kept a suited-up Swoopes on the sidelines on Saturday for 4th-and-1 and 4th-and-2 plays that running back D’Onta Foreman converted. Buechele also ran for a 10-yard score in the game. Two days later, Texas coach Charlie Strong said the 18-Wheeler package — a set of plays that drew its nickname from Swoopes’ jersey number — remained in the playbook.

“It isn’t shelved,” Strong said. “Sterlin (Gilbert) and I were even talking about that, and he said there were probably one or two times we probably could have went with it. It isn’t shelved, you’ll see the 18-Wheeler package.”

Swoopes is averaging 3.2 yards per carry during his senior year, and he has scored on seven of his 50 attempts. A three-touchdown performance against Notre Dame helped Swoopes earn a share of this season’s first Big 12 offensive player of the week award.

The 18-Wheeler package has been both lauded and lambasted, though. Swoopes has scored twice in his last five games, and his only pass during that span was negated by a penalty. The ineffectiveness and predictability of plays featuring Swoopes — as well as the decision to rely on him instead of Foreman in some situations — led to criticism of Gilbert, the team’s offensive coordinator.

Trent Domingue to remain Texas’ kicker through rest of season

With school records in hand, Michael Dickson is angling for Ray Guy Award