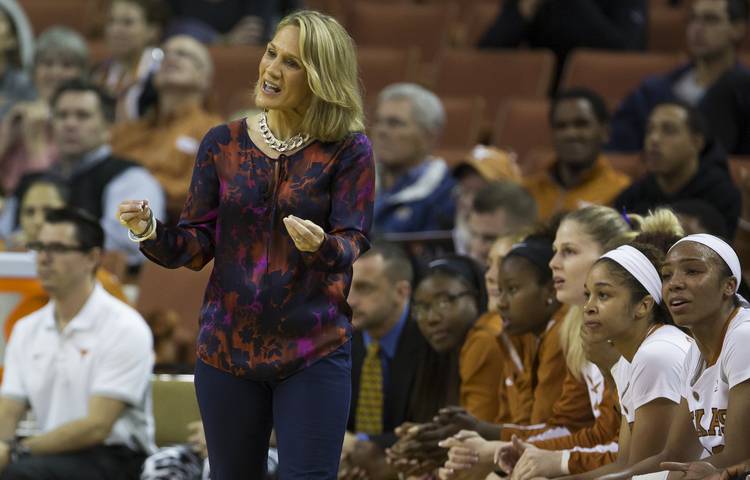 Texas's Head Coach Karen Aston against Mississippi State's during the first half of an NCAA women's college basketball game at the Frank Erwin Center in Austin, Tex., Wednesday, Dec. 2, 2015. RICARDO B. BRAZZIELL/AMERICAN-STATESMAN

A crowd of roughly 5,000 boisterous kids at the Erwin Center on Wednesday morning should help the Texas women forget about their season-opening defeat Monday night at Stanford.

The eighth-ranked Longhorns, tired and disappointed, got back to Austin around 3 a.m. Tuesday morning after their 71-59 loss to the 11th-ranked Cardinal. It left little time for them to regroup before hosting Houston Baptist in Wednesday’s home opener.

Students from more than 40 Central Texas elementary schools will be part of the university’s annual 40 Acres Field Trip.

Coach Karen Aston said she was “not completely shocked” her team lost on Monday. Texas, armed with five first-year players, traveled 1,750 miles to play an excellent team that had already played its opener.

“We have a lot of work to do,” Aston said. “I’m not surprised by some of the glitches, but disappointed we didn’t make better adjustments on defense.”

Stanford had a banner night on offense, hitting 54.5 percent of its shots. Junior guard Brittany McPhee led all scorers with a career-high 28 points, hitting 11 of her 15 shots.

Brooke McCarty, the leading returning scorer for Texas after she averaged 11.8 points last season, had 20 points and Ariel Atkins chipped in 14. McCarty, a 5-4 point guard, led the Longhorns with five rebounds.

“It was an eye-opener today,” McCarty told reporters after the game. “We kind of have to take that and roll with it. We just got outplayed and we got beat.”

Stanford owned a 42-26 edge in points in the paint and a 23-9 edge in points off turnovers. On a positive note, Texas won the battle of the boards 38-32 and earned a 12-4 advantage on second-chance points.

The Longhorns ended the Cardinal’s 28-game home winning streak with an 87-81 overtime win at Maples Pavilion on Nov. 20, 2014, when Stanford was ranked sixth and Texas No. 10 — the program’s first win over a top-10 team in almost six years. It marked the first meeting when both teams were in the top-10.

Following Houston Baptist, the next game for the Longhorns will be against No. 10 Mississippi State at 5 p.m. Sunday in Starkville, Miss. Last year Texas defeated the Bulldogs 53-47 in Austin.

Transfer Khaleann Caron-Goudrea (knee bone bruise), who did not play Monday, should return to the active roster next week, Aston said.

Houston Baptist is coming off a 118-43 loss to No. 2 Baylor in the season opener forth both teams Friday in Waco.

Is Texas good enough for D’Onta Foreman to win the Heisman Trophy?

So how did Vince Young end up as a Tennessee Titan, anyway?