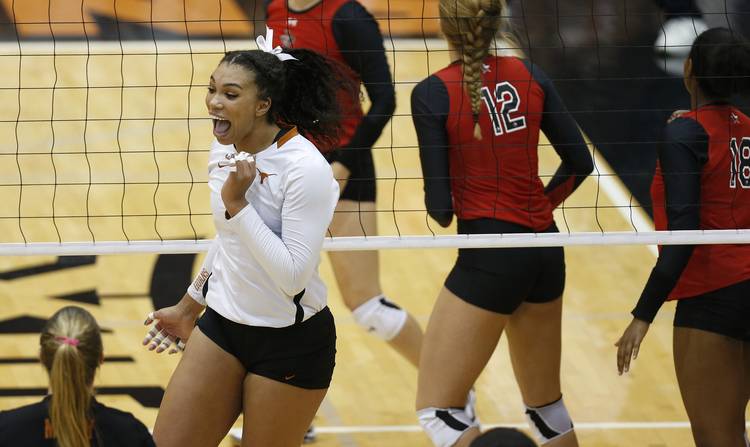 Texas responded to a setback with a sweep.

Junior outside hitter Ebony Nwanebu hammered home 15 kills and seventh-ranked Texas pulled away from Texas Tech in a 25-22, 25-14, 25-15 sweep at Gregory Gym on Wednesday night. The victory came four days after the Longhorns (20-4, 12-2 Big 12) were stunned by Iowa State in a five-set loss in Ames.

“That was a really disappointing loss,” said libero Cat McCoy, who was named the Big 12’s defensive player of the week on Monday. “I really liked the way that we came into practice with a good mentality and positive energy, and I think it showed tonight in the game. We were just having fun, and that’s why I think we played so well.”

Texas Tech (10-19) remained winless in Big 12 play, but the Red Raiders did hold a 17-14 lead in the opening set. Texas rallied, though, and a run in which sophomore Morgan Johnson was involved in three blocks gave the Longhorns control.

Following a three-point win in the first set, Texas strolled. The Longhorns never trailed in the second or third sets, and led by as many as 14 points in the finale.

It was Nwanebu’s night, though. She led all players in kills (15) and hitting percentage (.560). Before the match, she said that head coach Jerritt Elliott talked to the player ranked fifth in the Big 12 in kills about “just being confident and being the best player that I can possibly be.”

“I was like, why not, I’m just going to go for it and try to be fearless,” Nwanebu said.

Texas remained a game back of Kansas — a five-set winner at West Virginia on Wednesday — in the Big 12 standings. Texas will need a slip-up by Kansas in order to grab a share of a sixth straight Big 12 championship.

But more than a conference crown will be eyed by Texas over these next two Saturdays. Postseason seeding will also be on the line as the Longhorns close out the regular season at home against Kansas State and West Virginia.

Gregory Gym is almost assured of postseason matches since the NCAA tournament’s first and second rounds will be hosted by its 64-team bracket’s top 16 seeds. However, the regional showcases in which the third and fourth rounds are played will be hosted by the highest remaining seed in each of the four regions. A selection committee will reveal the seeds for the NCAA Tournament on Nov. 27.

“We’ve got a couple of matches left for Kansas to see what they can do,” Elliott said. “Our goal is to be a top-4 seed, and I think we have a chance of still doing that, potentially.”

The location of volleyball’s Final Four has already been set. The NCAA will crown its champion in mid-December in Columbus, Ohio.