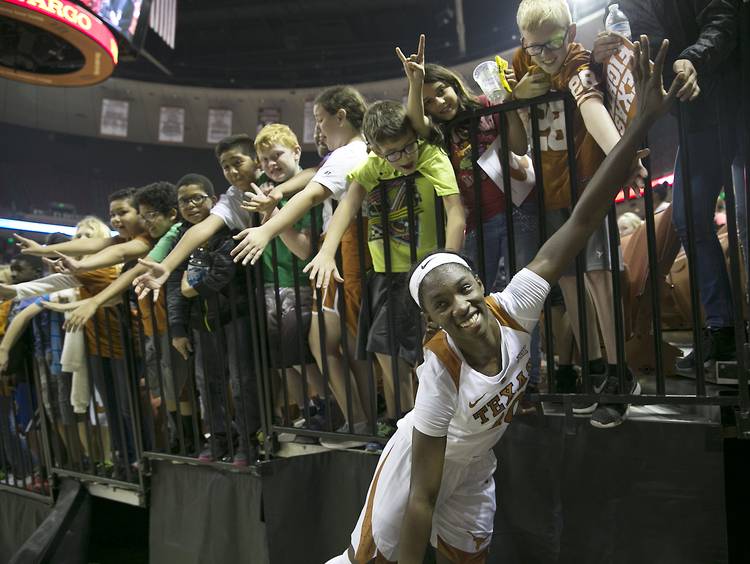 They came, they saw, they turned the Erwin Center into a no-hear zone.

A crowd of 6,378 — including roughly 5,000 students from 40 area elementary schools — danced, screamed, chanted and cheered while the Texas women’s basketball team humbled Houston Baptist 98-46 Wednesday morning at the Erwin Center.

By the time the smoke cleared from a pre-game fireworks display, the eighth-ranked Longhorns led 10-0. And by the time Brooke McCarty swished her third 3-pointer of the first half to give Texas a 57-21 lead, the kids were just finishing their boxed lunches.

The victory also signaled the unofficial beginning of the Joyner Holmes Era. Holmes, the nation’s No. 1 recruit in the country last year, shook off a slow start to finish with a team-high 22 points to go along with nine rebounds and three blocked shots.

Texas coach Karen Aston said the team showed improvement from Monday’s season-opening 71-59 loss at No. 11 Stanford. The Longhorns (1-1) were tough on defense, limiting the Huskies to 28.8 shooting from the field while blocking 10 shots and forcing 25 turnovers. Texas owned a 36-5 scoring advantage in points off turnovers.

“If we commit to it, one thing we can do very well is putting defensive pressure on a team for 40 minutes,” she said. “There’s no excuse for why we couldn’t do that because we have depth at every position.”

Holmes, making her first career start, showed strength under the rim, grabbing five of her nine rebounds on offense, several from her own missed shots. The 6-3 freshman has played effectively at guard, forward and center.

“If I can get an open shot or open drive, I’ll take it,” Holmes said. “Being a versatile player, I can play inside and out.”

No one played better from the perimeter than McCarty, who made her first four 3-point attempts and finished with 16 points. Her eyes lit up when she discussed the importance of playing before elementary school kids.

“A lot of the kids, they look up to us,” said McCarty, who signed autographs for about 15 minutes after the game. “They have a person that they kind of cling to. It opens up their eyes to someone who they can look up to and someone who maybe motivates them to do something when they grow up.”

How do Baylor and Texas stack up against each other?

“Joyner’s such a tremendous athlete and she’s going to pose everyone problems this year,” Finnie said. “But we really struggled with Baylor’s size. Our guards struggled more against Texas. Texas’ guards were a little quicker. But both are great teams and I’m excited to watch that matchup.”

The Longhorns will play their second Top 10 opponent in a week when they battle No. 10 Mississippi State on Sunday in Starkville, Miss. Texas earned a hard-fought 53-47 victory over the Bulldogs last season in Austin.

So how did Vince Young end up as a Tennessee Titan, anyway?