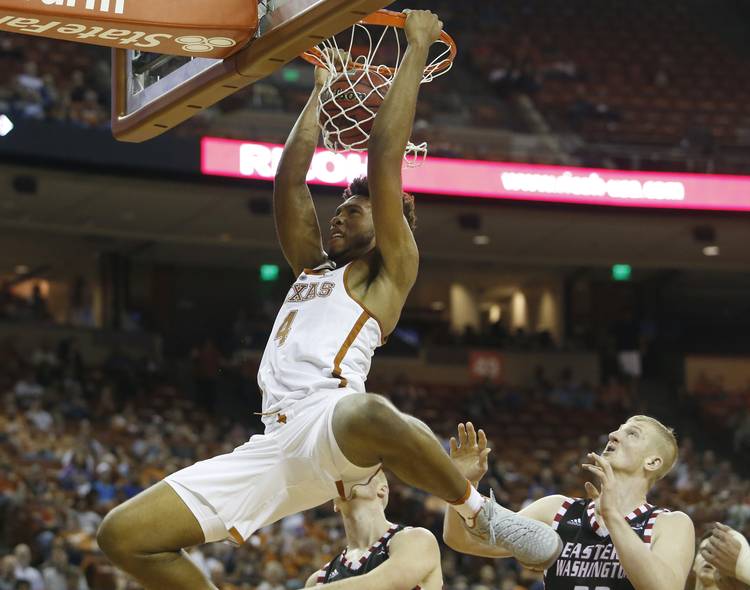 Three straight home wins in November sure sounds better than traveling thousands of miles to rack up three losses.

Last year, a veteran Texas team stumbled out of the gate to a 2-3 start with long road trips to China and the Bahamas. This season, a group of talented-but-young Longhorns got to start at home, sleep in their own beds and eat American comfort foods. It made quite a difference.

No. 23 Texas is off to a 3-0 start after an 85-52 demolition of Eastern Washington on Thursday at the Erwin Center.

Just how easy was it? The Longhorns had a 31-point lead with 4:58 left, and walk-on Ryan McClurg’s entrance was about the only thing that brought a sparse crowd to life.

“This might be shocking to you guys,” Eagles coach Jim Hayford said, “but we don’t see athletes like that in the Big Sky (conference).”

Not many college athletes get to see New York during the holidays, either. The Longhorns will pack their bags and head to Brooklyn next week for two games at Barclays Center as part of the Legends Classic tournament.

First on Monday comes a date with Northwestern, a 2-1 team that also beat Eastern Washington (1-2). Then, Texas will play either Notre Dame or Colorado on Tuesday.

Smart pointed out that while Texas started 2-3 last season, the competition was far better than what the Horns have seen so far this year. Everything is relative, he said.

Against the Eagles, senior Kendal Yancy (10 points) got things going with two 3-pointers and a block. Sophomore Tevin Mack followed Monday’s strong performance with a team-high 19 points by hitting 4 of 8 shots from 3-point range.

Freshman Andrew Jones put up his third straight double-digit game with a season-high 17 points. Kerwin Roach Jr. had a workmanlike night with 11 points, six rebounds and four assists while Eric Davis Jr. put up 10 points himself.

“Just mentally, our team is feeling good about themselves and feeling confident,” Davis said. “I think during this time last year, we were hungry. I think we’re just as hungry this year. We want more wins. Go on from there.”

Most fans couldn’t give a whit about these early season non-conference games. However, these are critical. On a practical level, November and December are months to build up wins for the postseason resume. But it’s also a time for team building, and in UT’s case, get some freshmen multiple chances to visualize success.

For example, Jones flat-out admitted afterward he didn’t play much defense in high school. The coaching staff was all over him this week to stay in a defensive stance on the floor. He had three steals to go along with hitting six of 10 shots from the floor.

Freshman Jarrett Allen had six points and nine rebounds, but the biggest stat of the night was his four assists. Senior Shaq Cleare had four assists all last season. Allen’s pump-fake, one dribble and slip pass to Kerwin Roach Jr. for a layup was beautiful.

And these are the games where Smart can watch how the youngsters react when things aren’t so hot. Freshman Jacob Young went 0 for 4 from 3-point range, didn’t score at all and had three turnovers in 19 minutes.

Each day, Smart said, is a learning process.

“I think just because we’ve got a lot of young guys who don’t know what the season is like, they’re willing to just give it their all because they don’t know,” Yancy said. “They’re willing to improve and grow every day. The energy they bring and everything is just good for the team in general.”

Betting the Horns: Vegas has been right on target for Texas all season