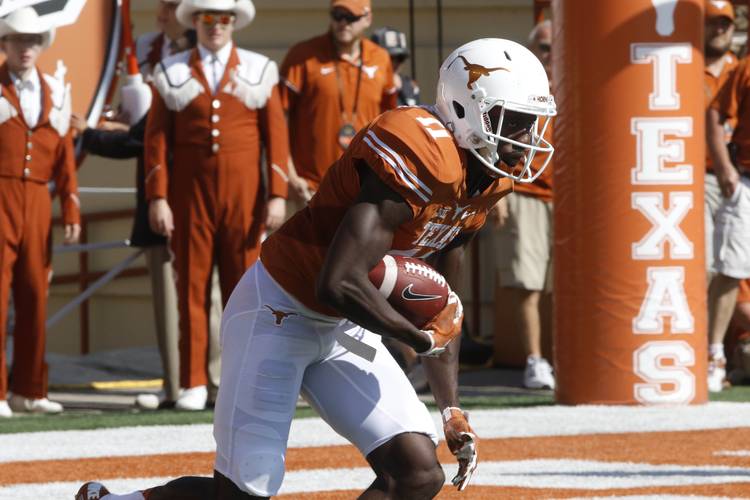 Thirty-six is the number worn at Texas by linebacker Demarco Boyd. Naashon Hughes’ 3.5 sacks have backed opponents up a total of 36 yards, and quarterback Shane Buechele’s one punt this year covered the same distance. Jamaal Charles, Steve Worster and Cody Johnson each rushed for 36 career touchdowns at Texas, which rank fifth in the school’s record books.

Thirty-six also is the number of kickoffs that Texas has returned this season.

The Longhorns are averaging 508.5 yards and 35.3 points per game, but the offense hasn’t gotten much help from the special teams. Texas averages only 18.8 yards per kickoff return, which ranks seventh in the Big 12. There are 104 teams in the nation that are performing better in this statistical category.

Here are some other kickoff-related tidbits:

The Longhorns’ most incriminating stat, however, deals with what happens when the team takes the football out of the end zone.

Texas has returned 16 footballs from its goal line. Only one of those got back to the 25, and none have exceeded that. A touchback on kickoffs, for those who are unfamiliar with the rule book, automatically spots the football at the 25.

“What you’d like to do is when the ball is kicked two or three (yards into the end zone), just leave it down there because we’re going to get the ball on the 25 yard-line,” Texas coach Charlie Strong said. “But a lot of the time, they think the seam is opening up.”

The decision to take the football out of the end zone is a responsibility not only for the returner, but for the deep man who doesn’t have the football. For Jacorey Warrick, that often means listening to freshman Brandon Jones — “If he gives me the hold up, I’m not going to go,” Warrick said.

Warrick is one of three Longhorns with at least six kickoff returns. He recorded a 30-yard return against Baylor on Oct. 29, but has been stopped at the 10, 18, 24 and 22 on his last four trips out of the end zone. On Monday, both Strong and Warrick said the Longhorns have been hurt by their blocking on kickoff returns.

“I always want to make a play, so sometimes I take chances,” Warrick said. “When we go back and we look at it, it’s maybe one or two people who just messed up, and it’s never the same person. A lot of inconsistencies, I guess.”

The Longhorns are looking for their first touchdown off a kickoff return since D.J. Monroe went 100 yards against Oklahoma State in 2012. Freshman Devin Duvernay leads the team in kickoff returns (12) and yardage (21.4 per attempt).

Does Texas have a chance to break through this weekend? Kansas ranks fifth in the Big 12 in kickoff coverage, having allowed 348 return yards over 44 kickoffs. The Jayhawks surrendered their last touchdown off a kickoff return in 2014.