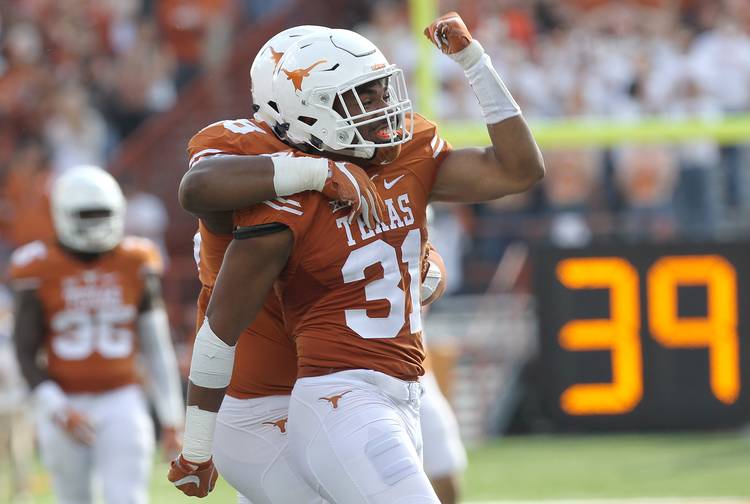 The Texas Longhorns are often puzzling to their fans, but Las Vegas has consistently had them figured out.

Only one Texas game has deviated more than 6½ points from the point spread, and that was against Cal way back on Sept. 17. The Longhorns were 7½-point favorites and lost by seven, 50-43, a difference of 14½ points.

In Big 12 play, oddsmakers are even more accurate on Texas, with seven results varying from the spreads by an average of 4.6 points.

So when Vegas says the Horns are a 23½-point favorite over Kansas on Saturday, expect the outcome to be pretty close to that number.

As good as oddsmakers are, they seldom have teams nailed down like they have with Texas. Take Oklahoma. The Sooners’ 10 final scores have deviated from the spread a total of 100 points. In conference play, Vegas has had a better line on OU with an average difference of 7.7 points. Not bad, but still not in the Texas range.

Nationally, the average deviation is just over 10 points, and top-ranked Alabama is in that ballpark. The final scores for the Crimson Tide’s 10 wins have been an average of 11.4 points off from the lines.

For the season, Texas, 5-5 overall, remains a slight money-maker at 6-4 vs. the spread.

The pick: Texas 38, Kansas 13. One must assume the Vegas number will be close again on the Longhorns. We also assume they will be motivated because getting to a minor bowl game is a big deal for the Horns. The Jayhawks had their “bowl game” last Saturday against Iowa State, losing the only winnable league game they had.

Big 12 outlook: Baker Mayfield is a better quarterback than Skyler Howard, and let’s stick with Oklahoma (-3½) to use its superior firepower to take down West Virginia in Morgantown. … Oklahoma State (+4½) over TCU: With Mason Rudolph riding shotgun, Cowboys can keep their title hopes alive in Fort Worth. … Kansas State (-2) over Baylor: Feels like the Bears’ season is crashing down with so many issues around the program.

Opposite ends: Attached are charts showing the best and worst teams this season against the spread. Colorado’s turnaround is remarkable. Temple, tied with the Buffs at 9-1 ATS, has been a consistent money-maker for the last three years. On the flip side, both Baylor and TCU are in the bottom 10 at 2-7, but the name that really pops out is Oregon. The Ducks are a horrific 1-8-1 vs. the number.