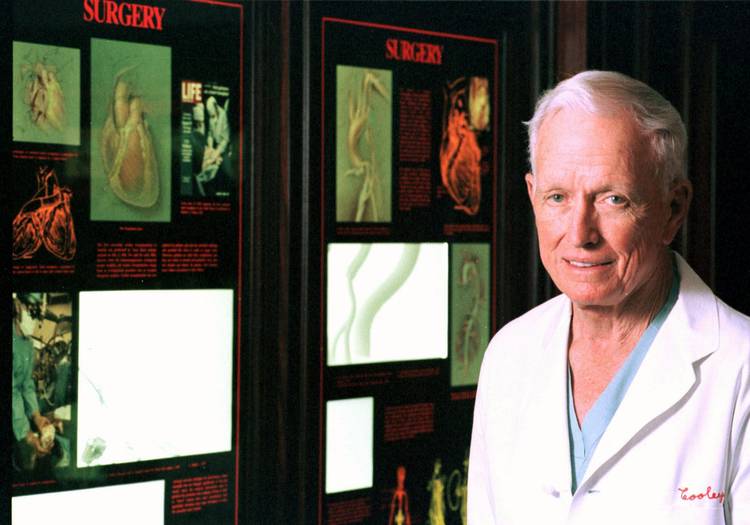 In this Feb. 9, 1999, file photo, Dr. Denton Cooley, poses next to a display at the Texas Heart Institute in Houston. Cooley, a Texas surgeon who performed some of the earliest heart transplants and implanted the world's first artificial heart in 1969, has died. Cooley died on Friday Nov. 18, 2016, at the age of 96. (AP Photo/David J. Phillip, File)

Texas coach Shaka Smart said the Longhorns are honored that Dr. Denton Cooley’s name is associated with UT basketball and the famous heart surgeon was “an incredibly bright, energetic and loving man who bled burnt orange.”

Cooley, the founder of the Texas Heart Institute and considered one of the world’s most renowned heart specialists, died on Friday. He was 96.

Cooley was best known for conducting more than 65,000 procedures at the Texas Heart Institute, as estimated by the Houston Chronicle. But he also attended UT on a basketball scholarship, majored in zoology and lettered in 1939-41.

“It was a wonderful experience,” Cooley said in 2010. “I was able to find a balance between academics, athletics and a social life.”

In May 1968, Cooley performed the first successful heart transplant. The following year, he became the first surgeon to implant an artificial heart into a human.

“There have been basketball players that have come through UT that have done more for the sport,” former Texas coach Rick Barnes once said, according to the Houston Chronicle. “But when you look at his contributions to society, it’s really quite astonishing.”

“On behalf of everyone associated with the Texas basketball program, both current and past, our sympathy goes out to the family of Dr. Cooley,” Smart said in a statement. “In my interactions with Dr. Cooley, he struck me as an incredibly bright, energetic and loving man who bled burnt orange. We are honored that Dr. Cooley’s name is associated with our practice facility.

“For our current and future student-athletes, he truly exemplifies taking advantage of the educational opportunities here at the University of Texas and using them to enrich the lives of others.”

Texas athletic director Mike Perrin said Friday was a sad day “as we’ve lost one of our own.”

“As a proud member of the T-Association and the Longhorn Men’s Hall of Honor, Cooley’s contributions to Texas athletics led to the training facility for the men’s and women’s basketball teams being named in his honor,” Perrin said in a statement. “He will be missed.”

Q&A with a Kansas beat writer: History, injuries point to a Texas win